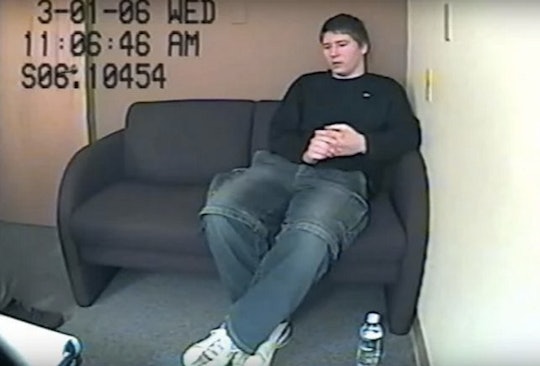 Who Is Brendan Dassey's Father? Peter Dassey Lives Nearby

For anyone who's been following Netflix's docuseries Making a Murderer, you know Brendan Dassey as the teen whose recorded confession to Manitowoc County investigators implicated his uncle, Steven Avery, in the murder of Teresa Halbach. Viewers saw Barb Tadych, Dassey's mother and Avery's sister, make critical decisions about how to handle her son's defense. It's painful to watch Tadych grapple with Brendan's situation without knowing the intricacies of the law. But what about Brendan's other parent? Who is Brendan Dassey's father?

Peter Dassey, Brendan Dassey's dad, lived in Twin Rivers, Wisconsin at the time of his son's trial and sentencing, according to the Post Crescent, a Wisconsin newspaper, and what appears to be Peter Dassey's Facebook page also lists Twin Rivers as the place where he lives and is from. To date, the elder Dassey hasn't made a public statement about Making a Murderer. Romper attempted to contact Peter Dassey through Facebook for comment on his son Brendan and what he thinks of the Netflix docuseries but has not yet heard back. The Facebook page was last updated Feb. 14, 2015.

According to the Minneapolis Gazette Review, Peter Dassey has four sons with Barbara Tadych, Steven Avery's sister: Blaine, Bobby, who testified for the prosecution in Brendan's trial, Bryan, and Brendan. After he and Tadych divorced, Peter Dassey married Lori Avery, Steven Avery's first wife. The Facebook page that seems to belong to Peter Dassey doesn't provide any information about his occupation, education, or interests, only that he is friends with many members of the Dassey and Avery families.

At the time of Halbach's murder, Brendan and his three brothers lived with their mother on the 40-acre Avery family lot where Teresa Halbach's car was found, the Gazette Review reported. The docuseries doesn't mention where Peter Dassey was during this time.

Brendan Dassey was sentenced to life in prison for being party to sexual assault, first-degree intentional homicide, and mutilation of a corpse. According to the Post Crescent, Peter Dassey visited Brendan weekly after the boy's conviction while he was awaiting sentencing. Peter said then that he hoped the judge granted Brendan the possibility of parole. "If he got life out of this for the first time (he was arrested), I don't think it would be right," the older Dassey said. "I could see maybe 20 years or something." Dassey also told the paper that he thought Brendan perhaps should have taken a plea bargain offered before his trial, which would have reduced Brendan's sentence to 35 years or fewer.

A Manitowoc County judge set a parole eligibility date of Oct. 31, 2048. There have been two appeals of this ruling, both of which were rejected by the courts. In 2014 lawyers for Dassey filed a petition for writ of habeas corpus, according to the Post Crescent. The petition puts the case before a federal judge to examine if a person has been imprisoned illegally. NBC Chicago reported that the suit is still pending a decision from a federal judge in Milwaukee.

It's easy to understand why viewers might be interested in Peter Dassey, beyond fans' obsessive interest in all things Making a Murderer. Tadych appeared to care very much about her son's future and wellbeing but also limited in her ability to help Brendan, apparently due largely to lack of education. Brendan, who was in special education classes in high school and has an IQ in the low 70s, at one point asked his mother what authorities meant when they said Brendan's statements were "inconsistent." Tadych answered that she didn't know. What isn't clear is whether Peter Dassey was also involved in Brendan's life at this point. If so, what advice was he providing? If not, might he have offered the guidance Brendan so desperately needed? And even if he had, would it have helped Brendan's case? We may never know.