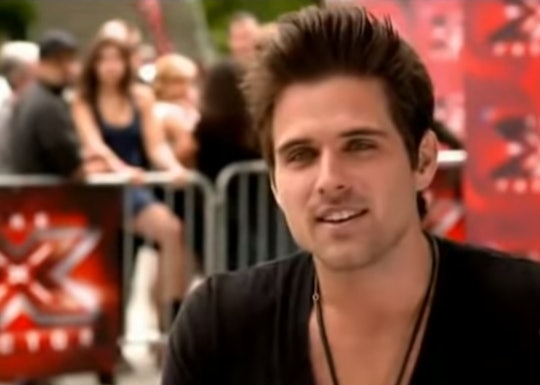 Everything You Need To Know About 'Rent: Live' Star Brennin Hunt

Live television musicals are all the rage these days and the next one hits the air on Jan. 27. Rent: Live is a broadcast of the Broadway smash hit, and stars big names like Vanessa Hudgens and Jordan Fisher, and lesser known mega-talents like Kiersey Clemons and Brandon Victor Dixon. One of the stars is a handsome man that viewers may think looks pretty familiar, and not just because he bears a striking resemblance to a young Rob Lowe. So who is Brennin Hunt, and where exactly have you seen him before?

The Oklahoma native has been laboring in the pop-country music world for several years, looking for his big break. He first came to public notice in 2011 with his appearance on talent show The X Factor. In the video clip package of his audition he thought he really had what it takes to be a star, and wasn’t shy about stating exactly what some of his attributes are. “I play music and I’ve been doing modeling on the side…I know that I already have a strike against me for looking the way I do. Image is definitely very important. If this guy over here had what I had on and walked over there people would think he was somebody just because of the way he was dressed.” Um, okay.

Nonetheless, Hunt managed to impress the judges enough with an original song to stick around through boot camp and to get sorted into the judges’ houses, according to his IMDb page. He was eliminated though, and went back to striving to get his voice and music noticed.

Hunt had a part in an episode of Nashville in 2015, according to IMDb, which probably went some way toward his goal. But it was appreciation from a major country star that really helped his career. In 2016 he co-wrote the song “I Can’t Do This” for Vince Gill’s album Down to My Last Bad Habit. “Vince is awesome, he’s one of the best people in the biz,” Hunt told the Las Cruces Country Music Festival. “Growing up in Oklahoma, the king of country…for me it’s Vince Gill. Because you know, in the 90s, he was the mecca of country music.” Gill went on to sing on Hunt’s single “Rip Off the Rearview”.

That was about the same time Rolling Stone named Hunt one of their 10 New Country Artists You Need To Know. In the list Hunt goes by only his first name, a decision he made because his name is just so hard to remember. “People can never get my name right. So I just decided to drop Hunt and let people focus on one name,” he told the Las Cruces Country Music Festival.

In Rent: Live, Hunt has been cast as musician Roger Davis, according to E! News. The character is a struggling talent so it’s a storyline Hunt should be able to connect with well. Coming up soon he’ll also be seen in the movie Walking With Herb, which is currently in post-production, according to Hunt’s Facebook page. The movie will feature one of his original songs, so it’s one more chance for his music to be heard.

Things may not working out exactly the way Hunt dreamed of but things are definitely on the upswing for this young man who is more than just a pretty face.