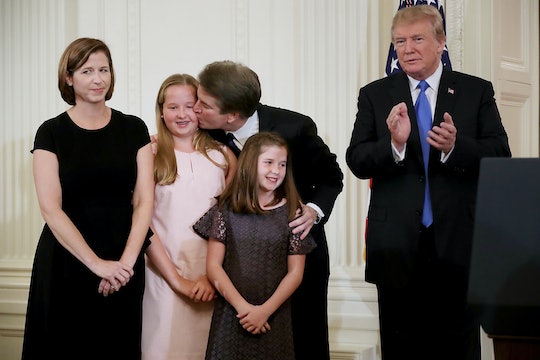 Now that President Donald Trump has chosen Brett Kavanaugh to replace Justice Anthony Kennedy on the Supreme Court of the United States, every aspect of his life is being scrutinized in the lead-up to his confirmation hearings. Everything from his professional judicial history to his personal life is up for analysis, and that includes his home life. For instance, who is Brett Kavanaugh's wife, Ashley Estes Kavanaugh? As it turns out, she has quite the political history herself.

Kavanaugh was born Feb. 12, 1965, in Washington, D.C., according to NPR. Kavanaugh grew up in Bethesda, Maryland, and went to Georgetown Preparatory School, PEOPLE reported. He is just 53 years old. Estes Kavanaugh, on the other hand, is a native of Abilene, Texas, and graduated from the University of Texas at Austin, according to Heavy. Her future husband instead attended Yale after high school.

And that realm extends outside of the workplace. When Kavanaugh and Estes Kavanaugh were married in 2004, President Bush and his wife, first lady Laura Bush, attended the ceremony at Christ Church in Georgetown, according to The Washingtonian.

Estes Kavanaugh's position is a non-partisan one, appointed by the Town Council, according to Heavy.

Estes Kavanaugh and the couple's daughters were all present for Kavanaugh's nomination speech. During his remarks, Kavanaugh said “I thank God every day for my family,” according to video of the occasion, below.

Estes Kavanaugh did not speak at Kavanaugh's appointment on Monday night, or at least, not on camera during her husband's acceptance of Trump's nomination. It appears she's mostly lived a quiet life out of the public eye — aside from her elected position in a small town — since her days as a personal secretary at the White House.

And not much is known about Estes Kavanaugh's own political views — it's not like she has a judiciary record to scrutinize the way her husband's will be by the Senate, after all. Estes Kavanaugh's Wikipedia page lists her political party as Republican, but there is no source for that information, and anyone could have added it.

Most of what the public knows about Estes Kavanaugh is based on her past experience in politics, and what her husband has told the public about her. During his nomination speech, Kavanaugh said his wife "was a source of strength, for President Bush, for everyone in this building" after September 11th, which is certainly admirable.

But other than her political position prowess and the praise from her husband, America doesn't know Ashley Estes Kavanaugh very well yet. In the weeks to come, as elected officials determine whether Brett Kavanaugh is a suitable addition to SCOTUS, there's a chance the public may just learn a little more about her in the very near future.