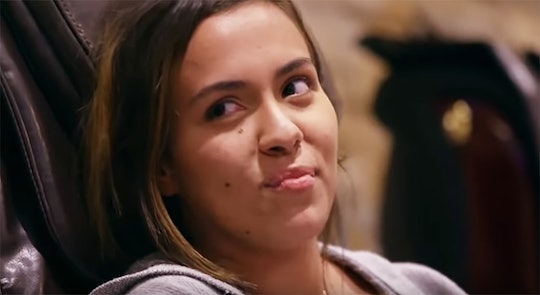 Teen Mom 2 star Briana DeJesus dated her fellow co-star, Javi Marroquin, for most of Season 8. But after their relationship imploded, Briana found love again with a new guy. So, who is Briana DeJesus dating now? Here's everything you need to know about her boyfriend.

In a preview clip for Monday night's episode of TM2, Briana is seen talking to her friend about dating someone new. As she gets a pedicure, Briana receives a text from said mystery man, a guy she refers to as "New York John" and "chicken guy."

Although the moniker of "chicken guy" lends itself to many interesting possibilities, Briana gave her man the nickname because she met him at a chicken restaurant. The reality star didn't divulge, however, whether she ran into her New York-based boyfriend at Popeyes or a more upscale eatery. I guess this is one detail fans will have to lose sleep over.

Apparently, the two hit it off after meeting at this elusive chicken spot. “We just vibe," she told her friend, according to The Inquisitr. "You know when you meet somebody and you guys just vibe and you guys talk all night and you guys are comfortable around each other? It’s like that."

At the time of filming Monday's episode, Briana was concerned about going to film with "New York John" — real name Johnny Rodriguez — because he wasn't used to the limelight.

Despite Briana's hesitations, it looks like everything worked out in the end. Want some proof? Look no further than Briana's interview with In Touch Weekly in January.

“Everyone’s always asking me about Johnny and I never know how to word it,” Briana explained to In Touch. “I’m very happy and my relationship with him is in such a good place. We are in no rush.”

It's not yet clear whether Briana or Johnny will move from their respective cities (Briana lives in Orlando while Johnny is in New York) for the relationship, but I'm pretty sure the discussion will come up at some point during this season of TM2.

If Briana and Johnny do solidify their union down the line, it's possible she'll have baby number three. "If things work out with Johnny — which of course I truly hope they do as they’re great right now — will I want another baby eventually? Yes," she told Radar Online.

But don't expect that moment to happen anytime soon. "Now that I’m dating Johnny and legitimately the happiest I’ve ever been in any relationship in my life, everyone is making assumptions I must be rushing to get pregnant," she explained to the outlet. "You can be in a good relationship without wanting a baby right away."

It sounds like Briana's love life is in a good place these days, right? Congrats, mama.