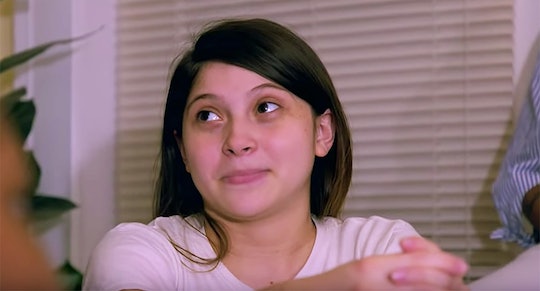 Teen Mom: Young and Pregnant star Brianna Jaramillo hasn't always had it easy in the relationship department. Want some proof? Jaramillo endured a nasty breakup with her now ex-boyfriend, Denae, shortly after the birth of her son, Braeson, in August 2017. The good news? Brianna Jaramillo has a new boyfriend named Robert Reams.

Fans might remember Jaramillo's tumultuous relationship with her transgender boyfriend, Denae. Although the two were on solid ground for a long period of time, their relationship quickly became toxic. "It was just a lot. I was taking a lot of my anger out on Brianna," Denae admitted during a reunion episode, according to Radar Online. "I have made some mistakes. I wasn’t the perfect person. I did treat you terribly and I do apologize for that."

Despite the exes' issues, Jaramillo promised Denae — who is not the baby's father — that she would allow him to keep in contact with Braeson. Sadly, that didn't work out either. She revealed, according to Radar Online:

I told him I would let him see Braeson even if we broke up. I did… I kept my word. I let him have him for overnight. I had calls constantly, ‘I can’t make this baby stop crying. What do I do.’ He couldn’t take care of this baby. And then I found out the next day he got drunk with my son there.

Although it's unfortunate that Denae and Jaramillo couldn't make it work, the mom-of-one did find love again sometime in January with a guy named Robert Reams.

Reams didn't hesitate to become a father figure to Braeson, often posing for pictures with the little guy. "What a little family we have become," Jaramillo captioned a March snap of the trio.

Reams also shared tons of photos of Braeson to Instagram, captioning one shot: "He's so damn cute I love this little monster." Aww.

Jaramillo clearly appreciates Reams support because she posted a tribute to his efforts in June, writing on Instagram:

I haven’t made a post about this handsome guy in a while . We are still going strong 💖💖💖 things have been tough and stressful with this trip and I am so thankful to have @robert_reams to help me take it day by day. Thank you baby. I love you so much 😘😘😘😘

But after some cute shots in July, Jaramillo stopped posting about Reams. Then on Oct. 5, Reams took to Instagram to suggest that it had been a while since he had seen Braeson.

"Its old but I love this picture of us babe 😢💓😘 @_brianna_lovee," Reams captioned a sweet shot of Braeson.

Things took an especially suspicious turn on Oct. 9, when Reams posted a broken heart emoji next to the word "goodnight." Reams followed up the sad message with a crying face emoji. Hmm...

If the couple did break up, it's fair to assume Reams will struggle to cope with the loss. Reams' entire Instagram is dedicated to Braeson and Jaramillo, after all. And not much is known about Reams outside of his relationship with Jaramillo, except that he has a tongue ring and lives in West Allis, Wisconsin.

Hopefully, Jaramillo and Reams are doing fine these days despite the red flags. It's clear the two have a lot of love for each other and little Braeson.