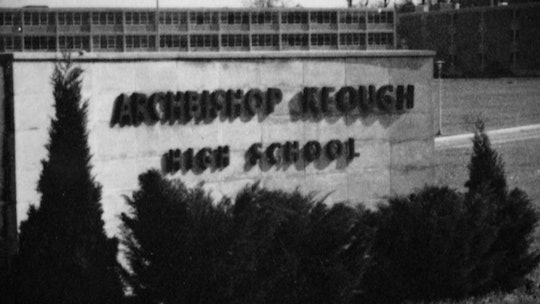 Brother Bob Is Completely Unknown In 'The Keepers'

Jean Wehner is central to the story of The Keepers. During her time attending the Catholic high school Archbishop Keough in Baltimore, Wehner has said that she was sexually abused by two priests who worked there, the school counselor Father Joseph Maskell and the director of religious services Father Neil Magnus (Maskell denied initial accusations until his death in 2001, Magnus died before allegations came to light). Maskell was accused to be the primary perpetrator of the abuse, though Wehner claims he arranged for her to be assaulted by other men whose identities she didn't know, one in particular was "Brother Bob." But who is Brother Bob in The Keepers?

That was one of the show's unsolvable mysteries. Wehner had repressed her trauma so deeply that she couldn't access memories of her time at Keough for decades. At the time the documentary was filmed, she was still unable to describe or visualize Brother Bob's face. However, she could remember several interactions that they had. She claims he was a man who was especially violent with her and had to allegedly be "reigned in" multiple times. Wehner also recalled information that supposedly linked Brother Bob to the murder of Sister Cathy Cesnik, a nun who taught at Keough and was a confidant for the women being abused.

Wehner claimed that after Cesnik went missing, Maskell allegedly brought her to see Cesnik's dead body in the woods to threaten her into keeping quiet about the abuse, as The Huffington Post reports. The feature states that she remembers Maskell saying to her, "You see what happens when you say bad things about people?" Brother Bob also functioned as yet another way for Maskell to threaten Wehner into silence. Shortly after showing her Cesnik's body, Maskell left her alone with Brother Bob for that purpose.

According to Wehner in the series, Brother Bob confessed to killing Cesnik, though he said it wasn't intentional and that he hadn't wanted to do it. Wehner says in the series she remembers him saying he hit Cesnik because she was going to go to the police about the ongoing abuse and that killed her. Brother Bob also blamed Wehner for Cesnik's death, saying that it should have been Wehner instead because Cesnik was a good person and Wehner was not.

In The Keepers, Wehner said that Brother Bob was "still to this day faceless to me," though she could recall other identifying features: a birthmark on his side, a small incision on his abdomen. But there was no way to know if Bob was his real name. His identity was one more unanswered question, though it could be the key to figuring out what happened to Sister Cathy Cesnik.