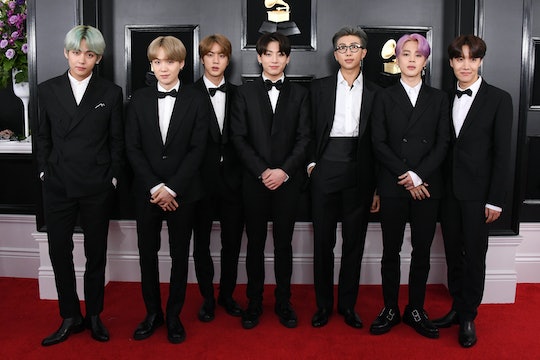 The BTS Army Is Blowing Up Twitter During The Grammys

I know I must be officially out of the loop because I am not that familiar with K-pop sensation BTS. But scrolling Twitter during the 2019 Grammys, it became clear that I am in the absolute minority. Were you, also, wondering who BTS is? Let me just say that if you thought Elvis, The Beatles, or Justin Bieber had passionate fans, you ain't seen nothin' yet.

OK, so first let's get the basics covered. BTS is a K-pop boy band comprised of seven members: V, Jungkook, Jimin, Suga, Jin, RM, and J-Hope. (I am assuming J-Hope is a stage name). The one you see speaking in all of the interviews (because he has the best English skills) is RM, who it appears is also the group's main rapper. They were not nominated for a Grammy, but they were slated to present an award at the ceremony, and basically as soon as they stepped foot on the carpet, Twitter went absolutely bananas. Seriously, just a casual glance at the site and you are inundated with photos of the adorable seven-some, whose identical floppy haircuts are differentiated by their colorful dye jobs. To be fair to all their hardcore stans, the guys did look pretty freakin' adorable.

You know those videos of the Beatles being basically mobbed by hoards of fans? It was the 2019 version of that, so it was happening on Twitter. Now, if you're wondering about the history of this dapper collection of humans and their music, Billboard breaks down BTS' creation and their rise to world domination. It turns out their history goes way back to 2012 when they were first established and they introduced themselves as a group on Twitter. This was followed by their debut album, 2 Cool 4 Skool and single, "No More Dream." From then, it's been a pretty meteoric rise. Especially since 2017, the guys have been non-stop on everyone's radar. And their fans (called their ARMY) could not be happier about it.

At the Grammys, BTS kept it classic fashion-wise, wearing sleek black tuxedos — custom designed for them by South Korean designers, JayBaek Couture and Kim Seo Ryong, according to Vogue. But the looks were anything but boring — having pink or blue hair certainly helps.

Like so many artists before them, the group spoke to Ryan Seacrest on E!'s red carpet, telling him they've been busy working on their next album. They also called going to the Grammys a "dream" of theirs, and referred to their ARMY as a "blessing." They also said that while Jimin is the one who's usually late (so much so that they've turned his name into a verb), this time it was Jungkook who held up the group because of "elevator" problems. Been there, buddy.

Look, I am not a member of this ARMY, but based on the overwhelming passion of their fans maybe I should be? I mean I must be missing out on something. So brb, heading out to look up some BTS jamz.