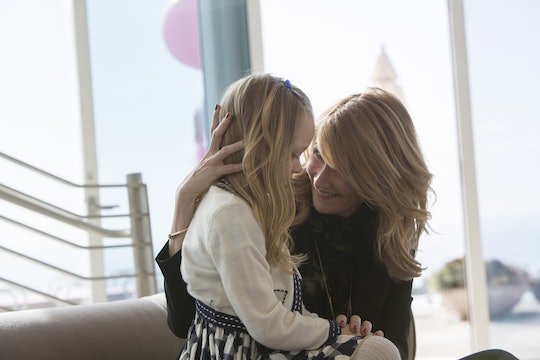 Amabelle's Bully Is Still At Large On 'BLL'

While the big mystery of Big Little Lies is what happens on a doomed Trivia Night, what makes the show — and the novel on which its based — so great is that there are several other mysteries throughout. One in particular is who is hurting Amabella, Renata's daughter. On the first day of school, Amabella pointed to Ziggy when asked who choked her on the playground. Renata immediately asked Ziggy for an apology, but he said he didn't do it. He, and his mother Jane, stick by those claims. But if what he's saying is true, then who is bullying Amabella on Big Little Lies? Her attacker still lurks on the playground.

The first grade teacher did not handle Amabella's situation as well as she should've and asked in front of all the other children and parents who bullied her on the first day. As soon as she pointed to Ziggy, Renata went on the attack and demanded an apology. While Ziggy and Jane insisted that he didn't do it, Renata didn't budge and animosity grew in the community. In a subsequent episode, Ziggy tried to kiss Amabella to apologize... but as you could imagine, this also didn't go over so well. While Ziggy did this, he's persistent in that he did not hurt Amabella and that they're friends.

On Sunday's episode, the issue wasn't resolved, but more light was shed on Ziggy's involvement. The teacher noticed something was wrong when Amabella wasn't singing with the other students. When asked about Ziggy, she called him her friend. The teacher then met with Jane and told her she's still suspicious of Ziggy and Jane took her to a child psychologist. (Warning: major spoilers from the novel ahead!)

For those who read the book, we know why Jane does this: she's terrified that Ziggy takes after his father, Saxon Banks/Perry, who raped Jane and is abusive towards his wife, Celeste. After the psychologist's evaluation, though, Jane is more at ease. She tells Jane she does not believe Ziggy is a bully and that he actually may be getting bullied himself. While Jane is relieved her son does not take after his father, it's still very concerning. If Ziggy isn't bullying Amabella, who is? Who is bullying Ziggy? It seems that the show may follow the plot of the novel, where Perry's son Max is ultimately the culprit. For now, though, we're eagerly waiting for the truth to come out.