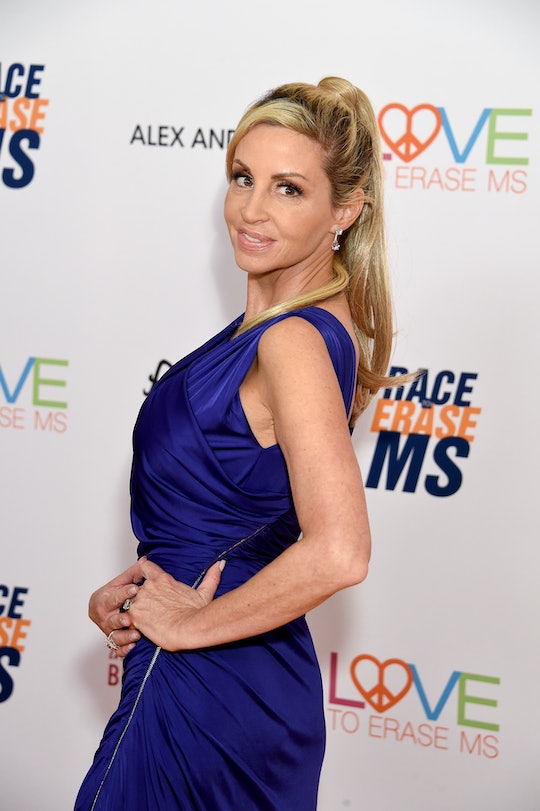 Camille Ties The Knot On 'The Real Housewives Of Beverly Hills'

In "One Wedding and a Polygraph," the women of The Real Housewives of Beverly Hills will travel to Hawaii to celebrate Camille Grammer's wedding. Audiences have seen glimpses of her relationship every step of the way, and now they'll get to see the big event. But Camille's fiancé hasn't been a big part of the show (though he has appeared), leaving some viewers wondering: who is Camille Grammer's husband?

Camille tied the knot with David C. Meyer in October 2018, as reported by People. They had been dating since 2016, and got engaged about a year later. Meyer is a lawyer and a partner with the firm Arent Fox. According to their website, he heads the Corporate and Real Estate Transactional practice. Per their description, he works with "international corporations, auto industry companies, emerging growth companies, select startups, and prominent individuals." He aids his clients with every aspect of the "business life cycle," from creation to expansion and sales. He also focuses on real estate, financing, and mergers and acquisitions.

Meyer's career likely keeps him out of the public eye to some degree, which may be why he doesn't have any readily available social media to give RHOBH viewers insight into his daily life. Outside of his relationship with Camille, he seems to steer clear of the cameras.

Meyer has two sons from a previous marriage whom Camille appears to be getting along with swimmingly. In March of this year, she posted a photo of the entire crew on a family skiing vacation with the caption, "I cherish these moments with my hubby and my stepsons. They are amazing boys. Kudos to their mom and dad." Camille has two children of her own, daughter Mason and son Jude, from her marriage to Kelsey Grammer.

Months ahead of the wedding, Camille's daughter spoke to Bravo's The Daily Dish about how much she liked Meyer. She wanted her mom to be happy, and knew that she was happy in her new relationship. "So I hope it works out and that it's good and the guy she's with I really like," Mason said. "So I think that's a big plus there too."

Much of the conversation about Meyer comes from those who know him, and not from Meyer himself. Like a few husbands of the Real Housewives, he wasn't involved in a profession that required him to be camera-ready or speak to the press often, so it doesn't seem like he has. But Camille is more than happy to gush about Meyer on her own Instagram account, which she does regularly. She shared photos from their honeymoon in Switzerland, as well as throwbacks to their wedding.

While talking to People, Camille said that she loved the way Meyer loved her. It meant a lot to her, and made her certain that they would "honor our commitment to each other for the rest of our lives." Meyer may be something of a cypher onscreen and off, but it seems like he's exactly who Camille was looking for.