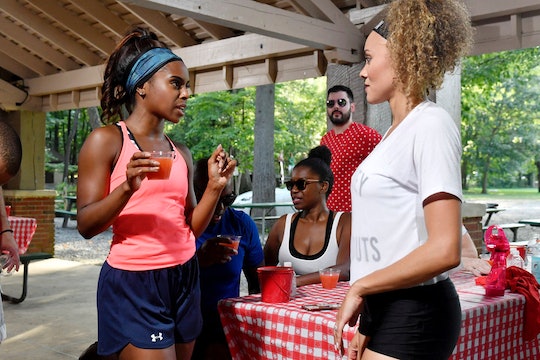 Everything You Need To Know About 'RHOP' Newcomer Candiace Dillard

Candiace is really accomplished in her own right and very far from an actual "housewife" in the traditional sense of the word. According to Bravo, the 31-year-old is from Biloxi, Mississippi but grew up in Atlanta, Georgia. Her parents both worked in the medical field, but she decided to go into politics after graduating from Howard University. Eventually, she ended up working as a staffer in the White House Offices of Public Engagement and Intergovernmental Affairs during the Obama administration and later hit the campaign trail with him in 2012.

After that, she got into pageantry, winning the crown at Miss United States and has been doing that ever since. She's also placed in the Sunburst, National American Miss, National Miss American Coed, Georgia Miss American Coed, Miss Maryland USA, and Miss District of Columbia USA pageants. But she's not just a gorgeous pageant winner — she's turned it into a business. Her tagline, for example, is, "Life is a pageant and I’m in it to win it."

Dillard started her own pageant consulting business and co-founded Prima Hair Collection. She's also the co-owner of Chateau Suites, which makes me think she might really get along with Ashley Darby, who's around the same age (she's 29) and runs her own businesses, too. In addition to her other businesses, she additionally started a women's empowerment foundation called My Sister's Keeper, so there are tons of opportunities for her to host an event where the women can all tear into each other, as they do.

Like Ashley, Candiace's fiancé Chris Basset is a restaurateur, so hopefully they don't get into too many battles about whose place is doing better or something. Candiace will be planning her wedding during this season, too.

Candiace obviously has a lot going on and it looks like she gets into it right away with the other women in the trailer for Season 3. You can hear Charisse ask, "Where does she come from?" and Candiace's response, "I come from Jesus." She may have a hard time winning some of these egos over. I'm thinking the similarities with Ashley, and the fact that Ashley has recently split from her husband Michael, will either make them fast friends or fast enemies.

Aside from Candiace, all of the women this season are RHOP vets and will bring all of their old baggage with them, too. Ashley, of course, is separated but still asking Michael to help her out with her mother's finances. Robin and Juan seem to have settled their money issues, too, and look closer than ever in the promo. They even kiss!

Gizelle seems to be doing just fine as always and Monique, too. However, Monique is in some real trouble with the other wives in the promo, apparently, as she yells at them, "Y’all ain’t no friends of mine that sit there and say you’re concerned. But I’m throwing shade, and I’m throwing hate, and I’m throwing lies? That’s what y’all do!”

We'll just have to wait and see where the pageant queen ends up fitting in with all of the inevitable drama that's sure to come once the series returns. Welcome to Potomac, Candiace. You're either going to love it or hate it.