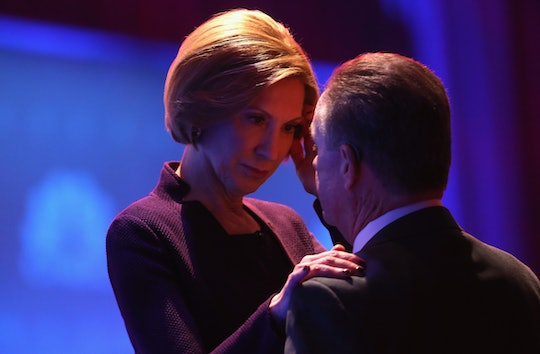 Who Is Carly Fiorina's Husband, Frank Fiorina? Meet The Potential First Gentleman Who Quit His Job To Support His Wife

Of the two women in the running for the next president of the United States, one is married to Bill Clinton, who most people have probably heard of before. The other is married to a former AT&T executive whose name was searched exactly zero times on Google as recently as the month of February 2015. So, who is Carly Fiorina’s husband, the mysterious Frank Fiorina? The potential first gentleman is a devoted supporter of his wife’s campaign with an interesting history of his own.

Throughout her campaign, Carly’s referenced Frank multiple times — from how his mother's choice not to abort him despite a doctor's recommendation shaped Carly’s pro-life views, to the story of Frank’s American dream. As he told LifeZette of his humble upbringing, “I started as a relatively poor boy in Pennsylvania. I did everything from cutting grass to driving tow trucks and I worked my way up to a vice president at AT&T.”

By the time Frank was 48, the Fiorinas were making enough money that Frank was able to take an early retirement to be a full-time family man and part-time bodyguard to his wife — a decision that that he told LifeZette divided people:

I took a lot of flak. Fifty percent of my friends and people who knew us were jealous, as in, ‘Wow, I would love to retire and live off my wife!’ The other 50 thought I was nuts to give up a great career and, as I’ve shared before, my father-in-law was in that camp. He couldn’t understand how I (could) just retire and be with his daughter. He changed his mind years later, but at first he was openly concerned.

The decision to retire early proved to be a good one when Frank was able to stand by his wife during Carly’s battle with breast cancer in 2009. He said he plans to do the same for the duration of her campaign — even if the negative things people have said about Carly concern him. “It bothers me that she is going to work very, very hard throughout these next couple of years,” he told the National Journal in February of her campaign. “We've been through a lot. I worry about that sometimes. I worry about her winning.”

Besides natural political foes, it seems Frank and Carly both have enemies of the ex-spouse variety. Carly was first married to Todd Bartlem, who told the Daily Mail in July that she took advantage of him to get through graduate school before cheating on him with Frank. Bartlem told the Daily Mail, “She is pathologically narcissistic and all she cares about is her.” (Carly’s said the relationships didn’t overlap and suggested in her memoir that Bartlem was the unfaithful spouse, according to Heavy.)

Around the same time as Carly’s divorce, Frank finalized his messy divorce from his first wife, Patricia Easler Fiorina, according to People. That couple had two daughters together, who became Carly’s stepdaughters when she and Frank married in 1985. In recent interviews and in her memoir, Carly failed to clarify she was not the girls’ only “mother.” Speaking to the Daily Mail in July, Frank's ex-wife said she took issue with that because it was “not how I remember it,” especially of the way Carly explained her and Frank’s efforts to help his younger daughter, Lori Ann, who died in 2009 from complications related to substance abuse.

Despite their bad reputations with their exes, the Fiorinas appear to have a solid marriage that’s lasted through 30 years, several significant career changes and, now, a run for the highest office in the land. And, although the rest of what we know about Frank at this point is fairly limited, we’ll almost certainly get to know him more the longer Carly is in the running for president.