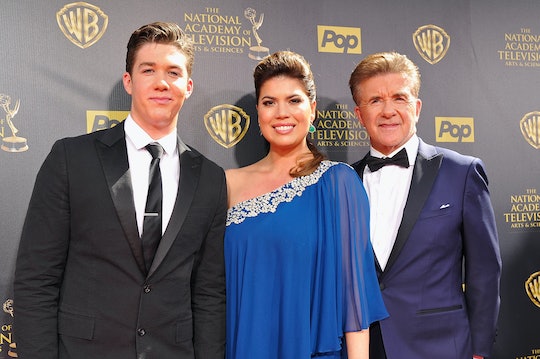 Who Is Carter Thicke? Alan Thicke's Youngest Son Is Also An Actor

On Wednesday night, Growing Pains and Fuller House fans found out that actor Alan Thicke had died of a heart attack, according to TMZ. But it's not just his fans who will be incredibly devastated by the news. Thicke also has a family — a wife and three sons — who are no doubt incredibly devastated by the loss. Specifically, Thicke's youngest son, who is only 19, must be going through unimaginable pain, losing a parent at such a young age. Who is Carter Thicke, Robin Thicke's youngest son?

His twitter bio describes him as a "Actor. Writer." Then it also jokingly says "Visionary? Probably not." Clearly Carter inherited his dad's sense of humor. Carter's most recent tweets are what you'd expect of a well-informed 19-year-old: his pinned tweet is a map of what the Electoral College reportedly would've looked like if only people 18-25 had voted, so it seems that, like the majority of people who voted, Carter was not happy with the way the 2016 election ended. He also tweet about Ken Bone, the undecided voter in the red sweater who America fell in love with during the second presidential debate.

Alan, who was a lifelong NHL fanatic, was reportedly playing hockey with Carter when he suffered the heart attack, according to Heavy. In a dark twist, the last tweet that Carter tweeted at his father was about organ donation:

It called on the "mom and dad bods" of the country to register to become organ donors. Clearly Alan listened to his son, because TMZ reported that a company was contacted to harvest some of Alan's organs. That might seem like TMI or something really dark in light of Carter's tweet to him, and no doubt it's foreboding. But harvested organs can save up to eight lives, according to LiveOnNY, which is a very small tinge of beauty or hope after loss.

It's clear that Carter and his dad were close, to some extent, given how often Carter tweeted at him, but also because Carter put up photos of himself and his siblings on Instagram:

The caption on this read "the boys."

He also shared this awesome Father's Day Instagram, featuring Alan being the kind of funny person that he will be remembered for in roles like Jason Seaver on Growing Pains.

Carter also tweeted some of the advice that he received from his dad once, and, hilariously enough, it seemed like just the kind of thing a sitcom dad would say:

But Alan made sure to note in an interview that he and Carter weren't so close that he probed into Carter's sex life, according to an interview with The Huffington Post:

I try not to micro-manage and have a bit of a don’t ask, don’t tell approach that relates to Carter’s sex life at least — kids don’t really want to talk to their dads about the details of that. I’ve never confronted him and asked, ‘Are you a virgin? Are you sexually active?’ I assume that he will be sooner or later so we talk about respecting women and being faithful in relationships… no surprise pregnancies… and STD’s.

Despite the fact that they did have some boundaries (the right kind, clearly), Carter seemed close to his dad and his dad's work, aspiring to be an actor himself. Alan commented on the importance of his role in Growing Pains in a 2010 interview, where he mentioned Carter, who was then 12 years old, according to the A.V. Club:

Happy for the role, both, as I said, what it stood for and what it did for me and my life and my family and my career. So if that’s what goes on my tombstone, I’m perfectly comfortable with it. It was a great opportunity that made my life good and something that I can show to my 12-year-old now in reruns. Corny and dated as it is, it’s still relatable, understandable, and he can look at it and say 'Yeah, I get it. Now I see what you did before I was born.'

And they are reruns that Carter will be able to return to for decades to come, because his dad left that kind of impact on TV, and on the lives of millions of people.