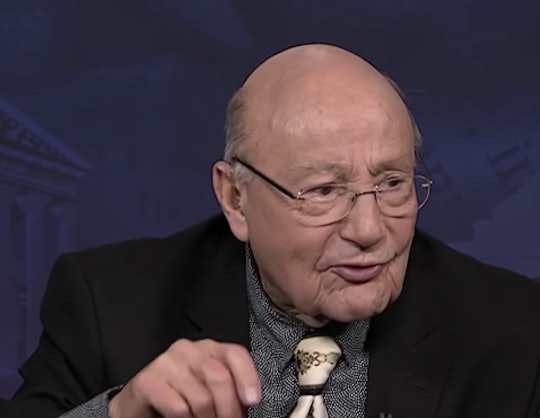 Trump Fires Announcer For Inaugurations Since 1957

When news that Trump had fired the inauguration announcer who had been doing the job for decades surfaced, people were incredibly upset. Who is Charlie Brotman? He previously had the pretty important job of announcing for the presidential inaugural parade — a job he's done since 1957 and since Eisenhower entered his second term, which means he's covered the ceremonies for 11 presidents.

But this year, the gig's been given to someone else.

Brotman was shocked when he recently learned that he lost the job, one that he's had for six decades, and he was so disappointed when he read the email about his ousting that he told CNN, "I thought I was going to commit suicide."

Brotman has had the honor of announcing at inauguration events for 60 years. He has said that he was "destroyed" when he first found out that he was being replaced, via an email from the Presidential Inaugural Committee, he told CNN's Carol Costello:

I looked at at my email, then I got the shock of my life. I felt like Muhammad Ali had hit me in the stomach.

Brotman said several media outlets have offered him hosting gigs since the news broke. But it's clearly not the same as acting as the lead announcer for the inauguration parade. So who is Charlie Brotman? And who is replacing him after years of dedicated service, with little notice? ‌

Brotman is a Washington native, and was previously an announcer for the Washington Senators baseball team. For 46 tournaments, he was also the voice of D.C.’s Citi Open tennis tournament.

While there are several announcers along the parade route every inauguration (it's not exactly short enough to only have one), Brotman has, for years, announced the parade to the president, "from a perch inside the media viewing area directly across the street from the presidential reviewing stand," according to The Washington Post.

So how did he get the job? According to an interview with tabletmag.com, it was a process that led to what he sees as an honor and patriotic duty. While he was enrolled at Washington's National Academy of Broadcasting in 1948 after completing his service in the Navy, organizers for the first televised inauguration, Harry Truman’s, came to the school looking for broadcast announcers and, along with other students, gave Brotman his first official gig:

Almost a decade later, after a stint as a disc jockey in Orlando, Fla., Brotman returned home as the new announcer for the Washington Senators baseball team. On opening day, in April of 1956, he welcomed Eisenhower, who was throwing out the first pitch against the Yankees...A few months later, Brotman got a call from Eisenhower’s office to see if he’d be available to reprise his announcing role for the inaugural parade in January.

Brotman thought that was the end of it, but he was asked back four years later for the following Kennedy inauguration. And the rest is history. Now that he's officially lost the job for this year's inauguration, what is Brotman going to do instead? And who's replacing him?

Brotman has received several offers for other announcer jobs covering the event, and he's chosen to work for the Washington region’s NBC station, NBC4, that day. He seems to be in good spirits about the gig, telling the Washington Post, "Now, I’m all young and excited again,” Brotman said. “It’s a new day. Instead of talking to a few thousands people, I’m talking to a few million people.”

This year, Steve Ray, a Washington D.C.-based freelance announcer and former volunteer for the Trump campaign, has been given Brotman's old job. Though initially disappointed, Brotman wished Ray nothing but good things, and he's working to move on from the letdown.

I was down, I was disappointed and I thought I would be doing it for the next 100 years. Now I’m not thinking about the old news, I’m only thinking about good news.

If he wants to, maybe Brotman will be able to return to the role for a future inauguration. A man with the time, dedication, and devotion he's given the gig deserves the respect he's earned.