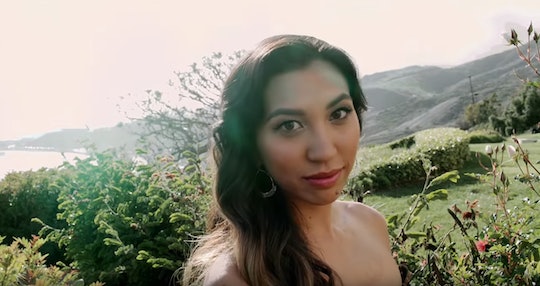 Pretty Little Mamas follows a group of five 20-something moms — Alyssa, Cheyenne, Nicole, Chandler, and Nikki — as they struggle to balance motherhood, relationships, and careers while staying glam. Fans are already looking into the cast’s social media for more clues about the women. And because she’s the only married one in the group, people want to know who Cheyenne is on Pretty Little Mamas?

Cheyenne Latu is a 25-year-old San Diego native, and she has two kids with her husband, Teli. According to her official MTV bio, Teli has had a hard time keeping a job, so all of the financial burden has fallen on Cheyenne, and the family are living with her dad. She's ready to leave the nest, but that's no easy task.

In an interview with Page Six, Cheyenne discussed how she was struggling to keep up with her friends' spendy lifestyles and how living with her dad has become more difficult. “A lot of a lot of the story with [Teli] and I — we’re really struggling financially and we’re not out on our own,” she said. “So being married and having two kids and not having like your own space, I think that’s the toughest thing. We are our own family but still living under someone else’s rules.”

On her Instagram page, however, you would never tell that Cheyenne is struggling. Most of what she posts are pics of her kids Kiele and King, and you can tell that she is a doting mom. From the looks of things on her social media Cheyenne seems closest to her Pretty Little Mamas co-star Alyssa, and the families apparently spend a lot of time together. Cheyenne posted a series of pictures with Alyssa’s family, including her son Kayden, at the zoo with the caption “family day.” And on Kayden’s birthday, Cheyenne posted adorable pics of King, Kiele, and Kayden playing together.

As you look through Cheyenne’s Instagram page, you can see that both she and Alyssa have been there for each other through most of their life’s biggest milestones. They have numerous holiday photos together, but Cheyenne was a part of Alyssa’s graduation ceremony from nursing school, and is now Alyssa’s maid of honor for her upcoming wedding to Brandon as well. It will be interesting to see how their close friendship plays out amongst their larger group of friends on the show.

But all the moms in the group have known one-another for years, and each "little mama" has her own story. Nicole, the leader of the group, is a 24-year-old mom trying to finish graduate school, while living with her parents and her full-time nanny. 25-year-old Chandlar was exiled from the group for years but has now been welcomed back into the fold. Chandlar has a daughter Aubrey and is pregnant with her second child — who's father is battling addiction. Nikki, 24, and the newest member of the squad, has a daughter Alaia, and is trying to pursue a career in modeling while she tries to grow her social media presence.

Living a glamorous mom life can’t be that easy (trust me, I know), so it will be fun to dive into the aspirational lives of these fab ladies.