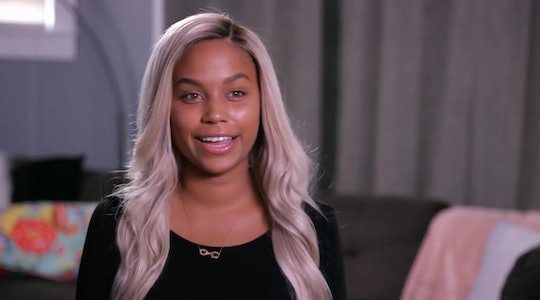 Two new cast members are joining Season 8 of Teen Mom OG: Cheyenne Floyd and Bristol Palin. While viewers might be familiar with Bristol because of her family's time in the public eye, they may be curious about the relatively-unknown Cheyenne. She has a daughter named Ryder with Cory Wharton, but they're not together; now she's dating someone named Zach. But who is Cheyenne's boyfriend Zach on Teen Mom OG?

Unlike several other women on the show, Cheyenne didn't get her start in the franchise on 16 and Pregnant, nor was she even a teen mom. She appeared on MTV's Are You the One and The Challenge: Rivals 3, where she met Cory. She welcomed her daughter when she was 24 years old. According to Cosmopolitan, Cheyenne and Cory have dealt with some ups and downs in their relationship that will likely get some screen time on Teen Mom OG. But Cheyenne's relationship with Zach is a big part of her story too, as fans will find out when Teen Mom OG premieres on MTV on Oct. 1.

In a clip from an upcoming episode made available by OK! Magazine, Cheyenne reveals that there's some tension between her, Cory, and Zach. "Cory is great with me when Zach and I are bad," she tells her friends. "And Zach is good with me when Cory and I are fighting. [...] I seriously feel like I'm going to be a single mom forever."

Zach doesn't have much presence of Cheyenne's social media accounts, so it's unclear whether they're still involved post-show or not. In fact, Zach is a difficult man to find online; the Instagram account that seems to belong to him is private. When it comes to learning more about Zach, curious viewers may have to wait for his Teen Mom debut.

However, in early September 2018, Cory appeared on the The Domenick Nati Show to talk about the upcoming season of Teen Mom OG, as well as his relationship with Cheyenne. He made it sound like Cheyenne and Zach were still solid. Despite what promos have shown, Cory said that he doesn't have any problem with Zach and that things are good between them. At the same time, Cory didn't dispel the idea that he might get back together with Cheyenne one day. RealityBlurb reported Cory saying:

Zach also seems to get along well with Cheyenne's family. In a clip from Season 8 on MTV's website, Cheyenne's mother says that she loves Zach "to death" and that he was the best friend Cheyenne could have had. She does raise some concerns about their burgeoning blended family, but Zach isn't worried: he explains that he isn't there to replace Cory, he just wants to be there for Cheyenne.

Zach is something of a mystery man for now, but fans will get to know him better as soon as Teen Mom OG returns.