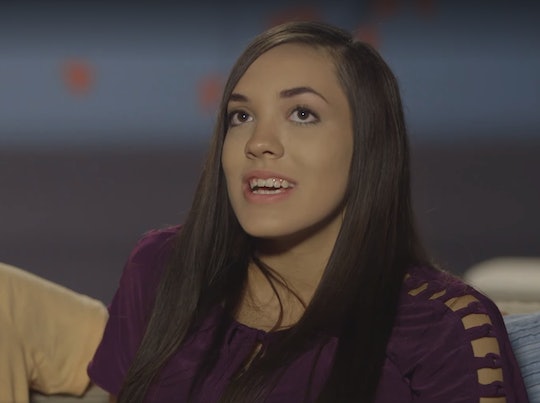 Here's What You Should Know About Chloe From TLC's 'Unexpected'

The second season of TLC’s reality teen-mom series, Unexpected, follows young teens as they try work through the complications brought about by their unplanned pregnancies, alongside their families and boyfriends. The show continues to follow some of the young women introduced in Season 1, as well as some new faces. For example, who is Chloe on Unexpected? She’s a young mom and high school student, and she seems to be doing the best she can to keep her life moving forward.

Chloe is a 16-year-old from Arizona, and from the first episode of the season, you can see that one of her biggest conflicts will be her parents' resentment towards her 18-year-old boyfriend, Max. While Chloe and Max seem to be fairly comfortable with the idea of bringing a baby into the world (all things considered), Chloe's mother Jessica is much more hesitant. On the show’s premiere episode, Jessica revealed that she was a teen mom herself — having two kids by the age of 19 — so she doesn’t want to see her daughter lose out like she did. In her older Instagram posts, you can see that Chloe was a high school cheerleader, which suggests that she had a lively social life. But on the show, Jessica explained that Chloe had to switch high schools to accommodate her pregnancy, and that could be another reason she is so concerned about seeing her daughter lose friends.

On Instagram, Chloe has been posting pictures of her newborn baby girl, Ava, and it looks like Max is still very much involved in her life. In one Twitter post, Max captioned a picture of his daughter with: “My baby girl Ava Grace Schenzel was born today I’m going to be the greatest father of all time!!! love at first site now I have my own family couldn’t be happier.”

While Max seems to be dedicated to Chloe and Ava, Nate (Chloe's step-dad), is concerned about Max’s ability to handle life with a new baby and doesn't believe he's as mature as he seems. When Nate asked him how he planned to support his new family, Max replied “Basically, I’m making good money right now, so I’m not stressed out, it’s pretty simple.”

It's hard to say exactly what kind of job an 18-year-old who just graduated high school might have that would allow him to support a child no sweat. So I can't help but identify with Chloe's parents when they express their distrust in the whole situation. That said, it appears that he is serious about building a strong familial bond with Chloe and their baby daughter. And, at least if social media is to be believed, the young couple are still together and going strong.

So what does the future have in store for them? Who knows, but I can truly say I wish them nothing but the best and that they get the happy little family they seem to be working towards. Unexpected airs on Sunday nights on TLC.