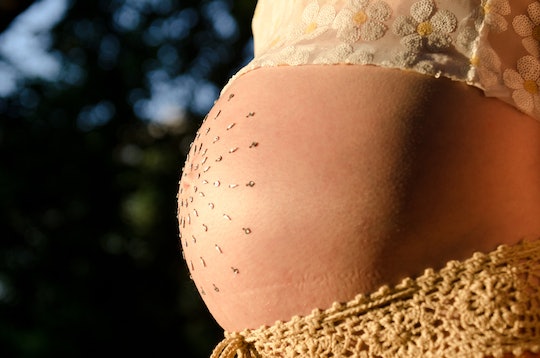 Who Is Chontel Duncan? The Fitness Model Has Been Taking On Haters

If you've been anywhere on the Internet recently, it's highly likely that you've come across Chontel Duncan showing off her baby bump. But if you're wondering, "Who is Chontel Duncan and why are we gazing at her abs?", then you probably aren't alone. Although she's been making waves in both fitness and parenting bubbles around the web, if you don't generally follow either of those bubbles regularly, you may have just missed all the recent drama that went down.

First, a little background. Duncan is a fitness model, trainer, and once upon a time, she was also a Miss Universe contestant for Australia. However, Duncan also recently became Internet famous for posting a now-viral image of herself with a client and friend, a woman by the name of Nat, showing off their respective baby-bumps back November. Since Duncan uses her social media accounts to share her fitness routine and the varying stages of her pregnancy, this should have been normal. Except this time, something was different.

So what's all the fuss about? In the viral photo, the two women's bumps could not look more different, despite the fact that they were around the same stage in their pregnancies at that time. In the photo, Duncan's bump was barely existent while Nat, who was just four weeks ahead of Duncan in her own pregnancy, was much bigger. "Each women carries different and this most certainly doesn't mean one is doing something wrong or not healthy etc," Duncan wrote in the caption.

It should be noted that the two women have completely different body types, though it seemed in her caption that Duncan had eeerily predicted the kind of opinions she and Nat would be subjected to once the photo was actually posted.

Obviously, this is the Internet we're talking about and everyone seems to have an opinion when it comes to viral photos concerning women, moms, and body image. This one just so happened to be the trifecta. "She's crazy tiny," wrote one commenter. Another added, somewhat cruelly, "Her pregnancy belly legit looks like those pregnant Barbie bellies."

This past week, the kickboxing instructor posted another photo to Instagram to take on the haters. Duncan said she was more than surprised at how many commentators thought they knew what was good for her body, elaborated on what was "normal" looking, and, quite possibly the most offensive, predicted that her business would start to fail post-partum because there would be no way to keep up. Um, what?

I've spent many years looking after my health and the health of others to the best of my ability and now I am continuing to focus on my health but more importantly the health of my unborn child's under the strict instructions of the best health professionals & openly share my journey. What's sad is how sheltered so many are on what is and what isn't healthy...It's safe to say there are people out there that underestimate the female body.

Duncan is a HIIT, or high intensity interval trainer, which means that she works out for a living. But forget six-pack abs and buns of steel, Duncan is using all that power to help her through her own pregnancy, which is pretty badass, if you think about it. In one photo, Duncan said she was even considering "standing labor" and giving birth on all-fours. Talk about strength. ("Girl power" is even way too weeny of a description for that kind of hutzpah.)

Celebrating that sort of strength has been Duncan's main objective since she began documenting her pregnancy and training on her social media accounts. She recently told Today's Parents that when the comments started to come in after she posted the original photo, she realized that many people calling her "selfish" for continuing to train during her pregnancy just hadn't realized that women go through pregnancy in so many different ways. In focusing on "the bump" and her muscle definition, commenters lost track of what was really important for new moms, which Duncan said was "keeping ourselves physically and mentally strong."

You don't have to kickbox at 37 weeks and eat grilled salmon every day to be strong, to carry a healthy baby, and keep yourself sane. But Chontel Duncan is trying to show her followers that doing all three of those things is entirely possible. She just never said it was going to be easy.