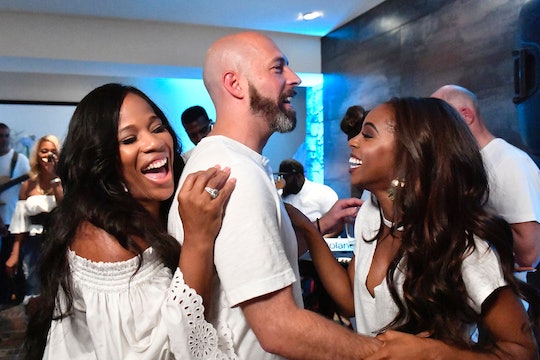 Who Is Chris Bassett On 'Real Housewives Of Potomac'? Candiace Dillard's Fiancé Has Fans Hyped For This 'RHOP' Season

The Real Housewives of Potomac has a new cast member this season to shake some things up, but it appears fans have gotten a two-for-one deal. Candiace Dillard will be planning her wedding throughout the season and it looks like her S.O. is going to have some storylines of his own. So who is Chris Bassett, Candiace's fiancé on The Real Housewives of Potomac anyway and how much will we love him?

Candiace and Chris are well entrenched in Potomac society, so the Grande Dame might be getting a run for her money this year. Bassett owns a restaurant called Myron Mixon's Pitmaster BBQ in the D.C. area, which hopefully fans will get to see throughout the season. He and Candiace apparently met while they were both working at another restaurant in downtown D.C., according to her official Bravo biography.

They were buddies for years until it eventually "blossomed into undeniable love," and Chris proposed to her in front of all of their family and friends.

Other than that, there's not a lot about Chris out there on the internet, but with RHOP being the hit that it is, that will likely change. Already, his Twitter bio says that he's a "Reality TV Minion/RHOP Susband" and his timeline is full of retweets about his future wife's role on the show. So he's definitely into becoming a "Bravo-lebrity."

Although he does seem a little worried. A few weeks before the premiere he tweeted at other Bravo husbands, including Joe Gorga from RHONJ and Peter Thomas from RHOA, writing, "get at me and give me the inside info on how to survive this!!" They might not be the best ones to give advice, though, what do you think?

He's most definitely going to want to get his own glam squad and prepare for the spotlight, though, since the new cast member always has a little trouble fitting in at first. In the promo for Season 3, Charisse asks no one in particular about Candiace, "Where does she come from?" Only to have Candiace come back with, "I come from Jesus." Maybe not the best way to make a first impression on this group of friends that already has so much baggage between them.

However, she might find a sidekick in Ashley Darby, who recently split from her husband Michael, also a restaurant owner. According to Bravo, Candiace is a pageant queen and even won Miss United States back in 2013 and earned top marks in the Sunburst, National American Miss, National Miss American Coed, Georgia Miss American Coed, Miss Maryland USA, and Miss District of Columbia USA pageant systems.

Ashley was also on the same pageant circuit, taking home the Miss District of Columbia crown in 2011. Whether all of these similarities mean they'll be fast friends or already-sworn enemies remains to be seen. Candiace tweeted in February:

Y’all Housewive types kill me with this “I came from nothing and look at me now...hard work and dedication blah, blah, blah...” All the hard work you did marrying your rich husband and spending his money. Girl, come out of your delusions and hushyamouf.

Those fighting words might not earn her many friends on the show this season. However, the RHOP men play a bigger role on the show than some of the other Real Housewives shows, so I'm pretty sure that whatever Candiace gets herself into, Chris will be by her side, consoling her in some gorgeous, marble kitchen island.

He said as much in a tweet, too, writing that Candiace "has supported [his] dreams over the years and is always [his] biggest fan....its great to have that support...and be able to return it as well....here for everything she wants in life!!" Fans were pretty excited about both Candiace and Chris once the promo was released earlier this winter.

Most Noted How Swoon-Worthy He Is

With a wedding to plan, RHOP fans to handle on social media, and a restaurant to manage, Chris Bassett has a lot going on these days. Let's hope he and Candiace stick around.