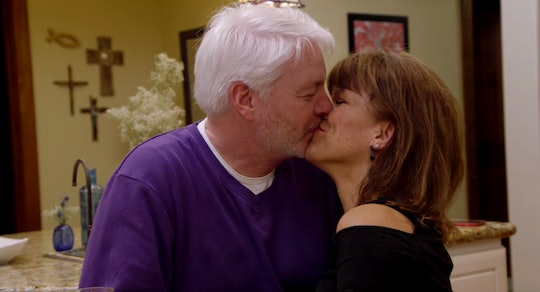 Who Is Chris Marek? Amy Roloff's New Fiance Has Never Been Married

It looks like congratulations are in order for one member of the Little People, Big World family. (No, there's not another Roloff baby on the way — at least not yet.) However, there is a brand new engagement. And right about now, fans of the TLC series are probably wondering: Who is Chris Marek?

On Friday, Sept. 20, Amy Roloff spilled the big news: She and her longtime boyfriend, Chris Marek, are officially engaged. Amy made the engagement announcement via Instagram and with an exclusive interview with People magazine. Apparently, Marek, 55, proposed to Amy on Wednesday — just one day after her birthday — at a restaurant where they have frequently dined.

“I’m excited, I’m so surprised, I’m thrilled!” Amy told People. “I never in a million years thought I’d be getting married again, but I also hoped for it! Now that it’s happening, I couldn’t be happier or more excited.”

Marek added, “I was very nervous! It had to be a heart shaped diamond because I knew that’s what Amy wanted.”

Amy showed off her engagement ring on Instagram, also reflecting on the milestone. "I was so surprised when Chris asked me to marry him. I said YES," she captioned a photo of herself wearing her new bling. "I couldn’t be happier and so looking forward to this new part of our life journey together. I’m blessed. Love you Chris. I love us."

If you remember, Amy was married to Matt Roloff, with whom she shares four adult children. (Twins Jeremy and Zach, Molly, and Jacob.) However in 2015 — after 27 years of marriage — she filed for divorce. When the divorce was final in May 2016, Amy put herself out there into the intimidating dating world. Fans first met Chris later that year, and rest is history.

So what is known about Chris Marek? Well for starters, he's a real estate agent, according to Good Housekeeping. Amy's husband-to-be has been a real estate agent for 20 years, and is part of a team of 50 people at Knipe Realty, according to Trulia. “I take great pride in offering superior service to my clients," he wrote on his Zillow profile. "If you're in the market to buy or sell a home please give me a call, I'd be happy to discuss your needs and provide advice at no obligation to you."

Marek is also an avid motorcyclist. “I’m having a good time,” Amy told her daughter Molly in December 2016. “You know, I had a couple of pool parties. I had, like, 40 people here. No, I probably had, like, 50 people here. Then this guy Chris that I met, he came to the party, too. We got to talking and he invited me to go on a motorcycle ride. Oh, I’m having a ball!” In August, the couple even went on a multi-day motorcycle trip along the coast, according to Distractify.

Marek — unlike Amy — has not been previously married. Despite witnessing a number of divorces in his family, however, he has remained opened to the possibility of marriage. It also seems Marek has had the opportunity to spend quality time with Amy's children — and everyone seems to get along pretty well.

Based on how Amy Roloff and Chris Marek have described their relationship, it seems like they're both very happy. I wish them the best as they celebrate this huge step forward together as a couple. Congrats, guys!