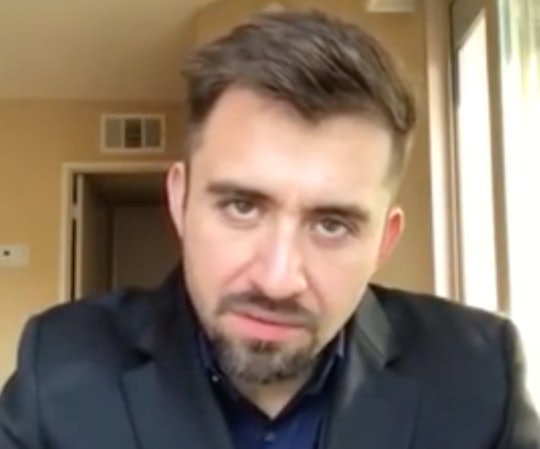 Adea Shabani's disappearance and death shocked, frightened, and captivated the public. The young hopeful actress was last publicly seen at her local coffee shop in February 2018. Not long after, her remains were uncovered in a wooded area. The discovery left people wondering, who is Chris Spotz and did he play a role in Shabani's disappearance? The case became the subject of a 12-part podcast called To Live and Die in L.A., which provides an in-depth look at the facts and theories surrounding the case and its chief suspect, Spotz.

Spotz was born in Colorado on June 29, 1984, according to his IMDb page. His parents divorced when he was very young, Newsweek revealed. His mother, Jade, still lives in Fort Morgan, Colorado with his stepfather Jack. Spotz's father, Chris Morez, lives in Sacramento, he revealed to the To Live and Die in L.A. host. Morez also said his split from Jade was nasty, revealing that they argued often about custody and changing their son's last name to his stepfather's, Newsweek reported.

According to Your Tango, Spotz — like Shabani — was an aspiring actor. The outlet noted that he attended the University of Northern Colorado, where he earned a degree in psychology. Per Your Tango, Spotz graduated from the college in 2009 and moved to L.A. to start his acting career. He enrolled in courses at the Stella Adler Academy of Acting, according to the site. Spotz and Shabani, who was also a student there, are said to have met during their time at the school. Spotz had some success in acting, according to his IMdB. He's credited with four roles, including Pickman's Model, Statues, and In Solitude with Me. Each is a short film, his IMdB page reveals.

He also had a YouTube account, according to Newsweek. His name on the platform was theCspotz, and he mostly uploaded clips from his acting career. Weeks before Shabani's disappearance, Spotz uploaded a video in which he reads a dramatic monologue that reads like a description of Shabani's murder. In it, Spotz says: "If I picked up the gun, and made the sacrifice, my life would be given back to me." He adds: "Absolution. My love would be given back. And she would never know what I did to get it back."

Spotz and Shabani were a couple, a friend told To Live and Die in L.A. host Neil Strauss according to the podcast. Strauss revealed that they started dating in September 2017, after they appeared in a play together. Spotz was engaged to another woman at the time, per To Live and Die in L.A. Her name was Mary Elmalak, and while he kept his relationship with Shabani a secret from her, Strauss said Shabani knew about Elmalak.

"I did not agree at all about the circumstances," the friend said, according to the podcast. "I was like, 'You're crazy, how can you trust someone that's engaged?' She said: 'You know how I like drama.' I"m like, 'Yeah but it's too dramatic! It's too much!'"

Your Tango reported that friends told Strauss the relationship was off-and-on. Spotz reportedly planned to leave Elmalak for Shabani, according to the outlet. He's said to have proposed to her in January 2018, and made the decision to move in together in February, but their relationship had become problematic. While Newsweek reported that Shabani was excitedly planning a wedding, conflicting reports suggest they were in a rough patch. According to Your Tango, the pair allegedly fought often and even reportedly got physical with one another. On Valentine's Day, according to the podcast, Spotz spent the evening with both his fiancées. He met Mary early in the day, and Shabani that evening, Newsweek reported. Shabani told an ex-boyfriend that she had two glasses of wine at dinner, blacked out, and woke up in her home with her phone missing. After checking the Find My iPhone app and discovered the phone was at Spotz's house. Shabani confronted Spotz about taking her phone, and he joked that she passed out because he choked her, adding that he left when he thought she was dead, per the podcast. Before she disappeared, Shabani is said to have told friends she was pregnant with Spotz's baby, according to To Live and Die in L.A.

In the podcast, Strauss revealed that Spotz and Shabani spent Feb. 21 — days before she disappeared — together. They saw a movie, during which Strauss said Spotz got a phone call alleging that his uncle had had a heart attack. He left the theater midway through the movie, according to To Live and Die in L.A. They met up again on Feb. 22, the night before Shabani disappeared, according to the podcast, they spent time together with friends, during which Shabani was invited on a trip to Mexico, which she turned down to attend Spotz's uncle's funeral. Strauss said on the podcast that surveillance video captured Spotz and Shabani leaving her apartment on Feb. 23, 2018 with luggage. That same evening, per the podcast, Spotz father Chris Morez, said his son showed up at his Sacramento, California home alone. He also said Spotz's uncle did not have a heart attack and was alive. Regarding Shabani's absence, according to the podcast, Spotz claimed he and Shabani spent much of the trip to Sacramento fighting, so he dropped her off in Santa Clarita, California.

"He just came up, came in the house. He was normal. There was nothing," Morez told To Live and Die in L.A., adding that he and his son got in a fight about his parents' divorce, and Spotz decided to spend the night in a hotel.

Friends reportedly started texting Spotz about Shabani's disappearance, Newsweek reported, and were in shock no one had seen her. According to the outlet, Spotz texted a friend on Feb. 25, 2018, "On Friday the last thing she told me was that I would never see her again."

Police were unable to corroborate this story, they revealed in a March 2018 press conference, according to the Fort Morgan Times. At the time, LAPD Capt. William Hayes said there was no "information that supports his statements that he had an argument with her and put her out on the side of the freeway." After her body was found, Hayes said in a press conference Spotz "was somehow involved in her death," according to the BBC. Before police could question Spotz, he traveled to Colorado with Elmalak, at which time an alert was put out for his vehicle, which was stolen according to Newsweek. The car was seen in San Bernardino, California, and Spotz led police on a 60-mile chase before shooting himself.

Less than a week later, Shabani's body was found, according to NBC News. Shabani had been buried in the Spenceville Wildlife Area in a shallow grave. The coroner's division "unearthed what appear to be the remains of an adult female." They could not identify the body in the field, but positively found that it was Shabani through an autopsy.

"The manner of death in this case has been determined to be homicide; however, the cause of death is still under investigation," the Nevada County Sheriff's Office said in a Facebook post after the discovery, adding that her remains showed evidence of blunt-force trauma to the head.

Spotz's death, as well as his apparent involvement in Shabani's death, came as a shock to those who knew him. Shabani's family will never get the justice they had long hoped for.