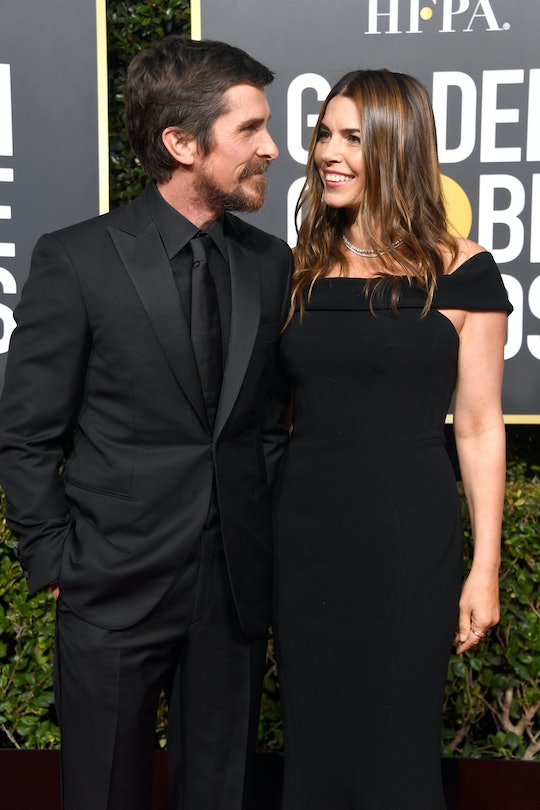 The 2019 Golden Globe Awards Sunday night were definitely kind to Christian Bale: the actor won the Best Actor In A Comedy Or Musical award for his portrayal of former vice president Dick Cheney in Vice, and he gave a pretty crowd-pleasing speech, even jokingly thanking "Satan" for "giving [him] inspiration" for the role. But it's likely that he really gained support from a much different source. Who is Christian Bale's wife?

The actor and Sibi Blazic have been married for nearly two decades, and honestly, based on his quirky acceptance speech, you could totally tell.

The Welsh actor took a moment to thank his "beautiful wife," but admitted that she had actually advised him to keep his speech short and sweet, adding, "she knows the dumb crap that can come out of my mouth at times." The fact that Bale ended up continuing on anyway definitely left those on social media quite amused — especially since he then went on to make his salty comment about Cheney, and take a dig at Senate Majority Leader Mitch McConnell. But the best part may have actually been when the camera cut over to Blazic in the crowd, looking gorgeous, yet also probably semi-horrified on the inside.

In fact, Bale's off-the-cuff speech helped inspire some truly entertaining memes, because it seems pretty much everyone in that moment could feel Blazic's pain in their souls:

As much as Blazic may have been internally cringing however, there's no question it must have still been a majorly proud moment for her to watch her husband win. And it sounds like, even after all those years together, they still have a seriously special bond. Not only did Bale thank her for her advice (which, to be fair, he seemed to opt not to take), he also thanked her for being the mother of their two children, 13-year-old daughter Emmeline, and 4-year-old son, Joseph, according to The Hollywood Reporter, adding, "they've given me a love and a soul I never thought possible."

In mentioning his children though, Bale definitely threw the crowd for a momentary loop, when he referred to them as "Banana and Burrito." Because, while it may normally be safe to assume he was just calling them by silly nicknames, in Hollywood, you can never really be too sure.

Although it sounds like Blazic may deserve an awful lot of credit for having a spouse who seems like he may put his foot in his mouth quite often, Bale also seems to have a very deep love and respect for his other half, who in fact has done some work in film herself. According to IMDB, "She is known for her work on The Dark Knight Rises (2012), George of the Jungle (1997) and Girl, Interrupted (1999)."

Elite Daily reports that "Bale reportedly met Blazic back when she was working as a personal assistant to a pre-Stranger Things Winona Ryder, who was a friend of his at the time." Bale got emotional when discussing Blazic to Us Weekly, and said, "She’s probably the most strong woman I’ve ever come across in my life. You’re making me all tearful! I’m too much of a softie! I don’t think I am, but then you got me with that!"

And in 2014, he told The Wall Street Journal magazine that his wife "was a stunt driver... She was chasing me through the city in Batman. She was driving one of the cop cars. She can do 180s and stunts and all that. She terrifies me. My wife terrifies me."

And from the sounds of a 2010 interview he did with Esquire, that feeling also seems to extend to his children as well. Speaking about his then-5-year-old daughter, Bale said, "I’ve absolutely fallen into that cliché of a dad who could just happily talk about my daughter endlessly," and added, "I love anything that she likes. If she's getting a kick out of it, I love it. I find myself tearing up at the most ridiculous things now, sitting next to my daughter while she's watching a movie."

In other words, Bale's speech may have been a bit of a tense moment for his wife, but then again, after so many years, she's probably used to it. And though he may not have actually followed through on taking her advice to keep his comments brief and controversy-free, the fact that he's so willing to lavish love and praise on her and their kids probably makes up for it.