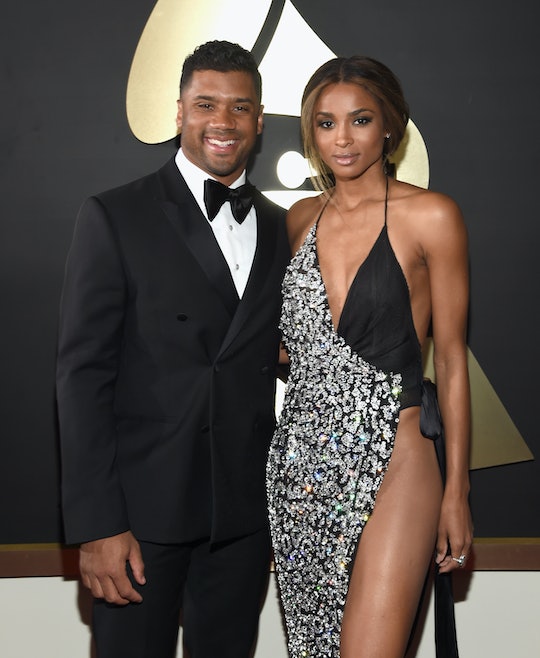 Who Is Ciara Engaged To? She's Marrying A Well-Known Quarterback This Summer

All eyes will be on Ludacris and Ciara Sunday night as they host the 2016 Billboard Music Awards. Fans of the show will be happy to see Ludacris back for his third turn as host, but this is Ciara's first year, so naturally, the singer-actress-model will be getting a bit more attention. So what's her deal? Does she have a new album? Is she single? Nope, in fact, she's soon to be officially off the market; Ciara is engaged to Russell Wilson, quarterback for the Seattle Seahawks, and the two are not at all shy about sharing the details of their relationship.

Though it's unclear exactly how the couple first got together, the rumors about Ciara and Wilson started in April 2015, when the two were spotted "getting cozy." Wilson confirmed the relationship in July, when he spoke to Pastor Miles McPherson of The Rock Church in San Diego and spilled all the tea. Wilson told McPherson that God spoke to him about Ciara: "[He] said, 'I need you to lead her' and I was like 'Really? Right now?' He goes, 'No, I want you and need you to lead her.'" How very casual. Wilson said that he then invited Ciara to take "all that extra stuff off the table and just [do] it Jesus' way," meaning that they would not have sex until marriage. She agreed, and eight months later, they were engaged.

The pair have continued to be very, very vocal about their love, their faith, and their abstinence ever since. On CBS This Morning in August, Ciara said celibacy was "a great challenge," but also "awesome." On Watch What Happens Live in September, she hinted at where exactly they draw the line; when Andy Cohen asked about "bases," Ciara said, "You just can't do the home run." She was a bit more demure in February when talking to Cosmopolitan: "You get to hug and you get to have a nice good kiss, but you have to be careful not to go too far so you don't end up in the place you're trying to avoid being in."

To be clear (as if it wasn't), the celibacy thing is new for Ciara; she has a 2-year-old son, Future Zahir, with rapper Future. By all accounts, Wilson will make an excellent stepfather to the boy; Ciara has shared pics of herself with her "boys" posing together at Disneyland and Sesame Street Live. On Thursday, when Ciara posted a birthday tribute to her son on Instagram, Wilson added a sweet comment:

Watching him grow over the past year and a half has been the most fulfilling and special things I've ever been around. He gets the purest and the sweetest love from you and to watch you be the woman and mom you are ALL the time. Every morning. Every night. Every day… No matter what the circumstances or situation… good or bad… brings me so much joy & most importantly him. He is so blessed to have you hold him and hug him and love him with so much pure and real love that he will have no limits to what God has in store for him. You both bring me pure joy and I can't wait to see him grow more and more into the loving, caring, kind-hearted man that he will be...2 years old! Wow. God is good!

Adorable. Ciara seems like a very lucky, very happy woman. The wedding is rumored to be taking place this summer. Sounds like it can't come soon enough.