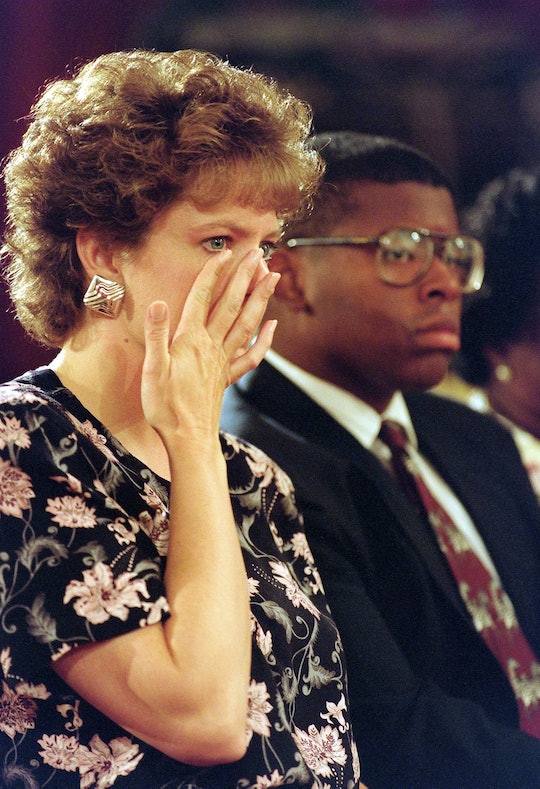 Who Is Clarence Thomas' Wife? She's Had An Impressive Career Of Her Own

The HBO drama Confirmation revisits the complex story of Anita Hill’s role in the 1991 hearings for Supreme Court nominee Clarence Thomas. For both old and fresh eyes to the testimony — airing on Saturday — Confirmation ultimately portrays how justice was denied for Hill and how problems with politics, race, and gender still harshly affect America. Thomas has been a Justice on the Supreme Court for more than two decades now and he hasn’t been without his wife’s support then or now. So, who is Clarence Thomas’ wife?

First, here’s a little background: Anita Hill (Kerry Washington), a University of Oklahoma law professor at the time, accused Clarence Thomas (Wendell Pierce) of sexual harassment. Hill testified in graphic detail about how Thomas talked to her about sexually explicit topics — penis and breast sizes, favorite porno movies, and his own sexual prowess — when he was her boss in the 1980s at the Equal Employment Opportunity Commission. Thomas not only denied the allegations, he also accused the Senate of “high-tech lynching.” Thomas’ second wife ,Virginia “Ginni” Thomas (Alison Wright), sat behind her husband as he testified before Joe Biden (Greg Kinnear) and Ted Kennedy (Treat Williams) and as he intensely fought for the coveted seat.

More than twenty years after Thomas’s confirmation into the Supreme Court, his wife called Hill and left a message, seeking an apology. The message said:

“Good morning Anita Hill, it’s Ginni Thomas,” it said. “I just wanted to reach across the airwaves and the years and ask you to consider something. I would love you to consider an apology sometime and some full explanation of why you did what you did with my husband.”

She later released a statement The New York Times regarding what she meant by the phone call. She said:

“I did place a call to Ms. Hill at her office extending an olive branch to her after all these years, in hopes that we could ultimately get past what happened so long ago,” she said. “That offer still stands. I would be very happy to meet and talk with her if she would be willing to do the same. Certainly no offense was ever intended.”

Ms. Thomas stood by her husband throughout the very public and graphic accusations against him. But, she’s not just a housewife. She’s been quite busy and has had a pretty active career since her husband’s confirmation.

She’s an attorney, a columnist, and describes herself as “a social entrepreneur who loves liberty.”

In 2009 she founded Liberty Central, a nonprofit group that lobby against Democrats, but stepped down a year later. According to the Washington Post, she didn’t want her “media celebrity” to create any “distractions” for the organization, though she hasn’t kept completely quiet on her political stance. She also participates with Groundswell, another lobbying group for Conservatives.

Currently, according to Ginni Thomas’ Facebook page, she’s a special correspondent for the Daily Caller News Foundation. She regularly posts on social media, including a pretty epic selfie of her and actor Tom Selleck and a snapshot of an adorable Brittany Spaniel puppy.

Confirmation debuts right in the eye of a political storm during the campaigns for this year’s presidential election and will be sure to spark plenty of real life controversy because the TV movie is based on real life. The testimony highlights the hardships women and politically important people faced, and Ms. Thomas’ perspective of everything that went down in the courtroom back then won’t be left out of the story.