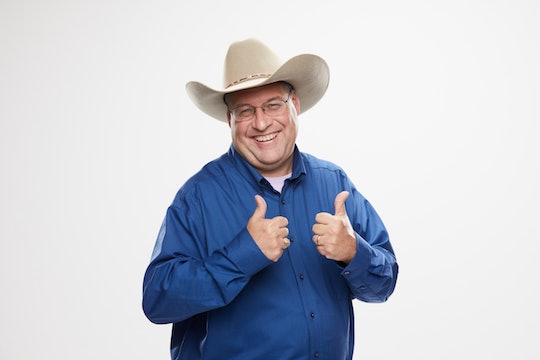 Season 21 of Big Brother premieres on Jun. 25, and fas can’t wait to spend the summer watching a house full of contestants scheme and collaborate to win the coveted grand prize. There’s one contestant that stands out from the rest, and fans want to know everything about him. So, who is Cliff Hogg III on Big Brother, and what kind of strategy is he bringing to the competition?

According to his Big Brother bio, Cliff is a 53-year-old petroleum engineer from Houston, Texas who enjoys watersports (including fishing, jet skiing, swimming, and scuba diving) and gardening. He describes himself as funny, stubborn and caring and revealed that he loves to discuss and debate politics when an appropriate situation arises. In his bio, Cliff also revealed that he’s the jokester of his family, once swam with alligators, won an award for rowing, and learned how to drive at the age of seven.

In an interview with ET Canada, Cliff mentioned that he’s been a big fan of the show, and that he’s really excited to be a part of Season 21. He also talked about how his personality makes him uniquely qualified for the game. “I think I’m a very charismatic kind of guy,” he said. “I’ve traveled all over the world, so I’ve got a lot of stories. I’ve slept under bulletproof blankets, had guns pulled one me, been involved with flooding, mobs, the criminal type, the government type — Working the oil field, there’s way too many places that have oil where things aren’t always so good or so friendly.”

When asked about his strategy for winning the game, Cliff said he’d start by forming alliances early on. “Being an older guy makes me a little bit of a target, so I think I’m about to play a little more aggressively than maybe I would otherwise if I was fitting more into the rest of the group,” he told ET Canada. “But I think initial strategy is really that I’m going to have to find people who want to play the game a little bit early. Maybe some dominant players, some alpha-male type guys, and see if I could go to them and say ‘Look, I’m a loyal soldier, you got a vote you can count on, I will watch your back, you watch mine,’ and see if I can get in some alliances with those guys. Use them as a little bit of a meat shield, let them be the targets, more so than me sitting in the back, that’s this non-threatening guy that’s just hanging around entertaining people.”

In his CBS bio, Cliff explained that he’ll form alliances when needed, but will also cause discord if he has to. “Present myself as the loyal soldier to one or more strong players while creating enough chaos or paranoia to have people pointing fingers and targeting each other,” he admitted. “People will assume that I am a loyal kind of guy because that is how I live my life in the real world. I will use that to my advantage and betray as necessary in the end game to get me to the finale.”

It’s too early to predict how well Cliff will do this season, but he's going in to the game with a concise strategy that could take him far. Fans will just have to watch through the summer to see how he fares in the Big Brother house.