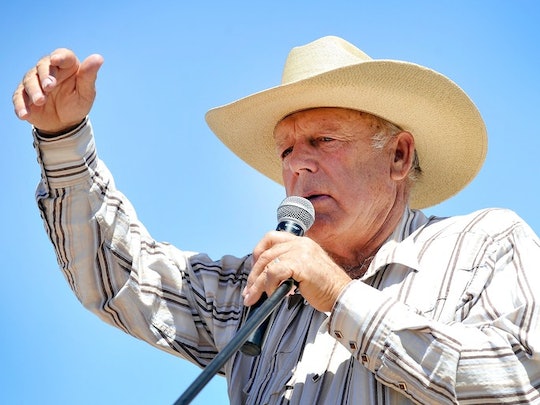 Who Is Cliven Bundy? The Oregon Standoff Has Ties To The Anti-Government Nevada Rancher

A group of armed people overtook a federal wildlife refuge in Oregon this past weekend, and can be characterized as either protesters, a militia, patriots, or terrorists, depending on your political leanings. The group appears to be led by brothers Ammon and Ryan Bundy, who are no strangers to armed standoffs with the Bureau of Land Management. Their father, Cliven Bundy, was at the center of a similar dispute in 2014. But just who is Cliven Bundy? The government isn't standing up to his supporters in Oregon right now.

The group, which many are referring to as an "armed militia," has occupied land and buildings at the Malheur Wildlife Refuge in protest of the federal arson convictions of Dwight Hammond, Jr. and Steve Hammond, who set fire to 130 acres of federal land in 2001. Bundy's sons, Ammon and Ryan are leading the group, though it's not clear why.

It all started in 1993, when Bundy, a Nevada cattle rancher, decided that he should be able to let his cows graze wherever he pleased, without paying for it. The Bundy family had been paying for grazing rights on federal land since 1954, according to Talking Points Memo, and although Bundy claimed that his family has been in the area since the 1800s, Las Vegas television station KLAS reported that property records show that the Bundy family purchased their ranch in 1948. In 1993, the BLM reclassified the land where Bundy had been grazing his cattle as a conservation area in an effort to protect the endangered desert tortoise. Bundy, who refuses to recognize the authority of the U.S. government, continued to use the land.

In 1998, a federal judge issued an injunction ordering Bundy to remove his cattle from federal land, according to the Washington Post. Bundy still refused to do so, and in April of 2014, after years of fruitless court battles, the BLM prepared to remove Bundy's cattle themselves, hoping to sell some off to recoup over $1 million in back fees owed by Bundy for his unpaid grazing. So, Bundy did what anyone would do in that situation: he bunkered down with his 14 children and 52 grandchildren at his ranch and amassed a militia of more than 30 armed protesters.

As the BLM moved in and began rounding up cattle, a confrontation broke out between law enforcement officials and Bundy's group, culminating with Ammon Bundy being tasered for kicking a police dog, according to Mother Jones. Tensions grew even further as Bundy eventually amassed an army of 600, according to ABC News, including snipers who blocked off an interstate highway. After more than two weeks, the BLM eventually backed down, citing safety concerns for civilians.

The group saw this as a major victory for "patriots" who support "states' rights," although it seems that this was never really about states' rights to begin with. Bundy happily took on the role of spokesman for the movement, promising to conduct daily press conferences at his ranch. After the federal government's withdrawal, his audience dwindled, eventually drawing only one reporter, who was able to capture some of Bundy's shocking statements, which strayed far from ranching and patriotism. "I want to tell you one more thing I know about the Negro," he said, recalling a time he drove past a Las Vegas housing project, according to the New York Times:

And because they were basically on government subsidy, so now what do they do? They abort their young children, they put their young men in jail, because they never learned how to pick cotton. And I've often wondered, are they better off as slaves, picking cotton and having a family life and doing things, or are they better off on government subsidy? They didn't get no more freedom. They got less freedom.

This is the father of the two men leading the anti-government militia that is seizing land and buildings under the guise of "patriotism." Cliven Bundy is no patriot, and he's no hero.