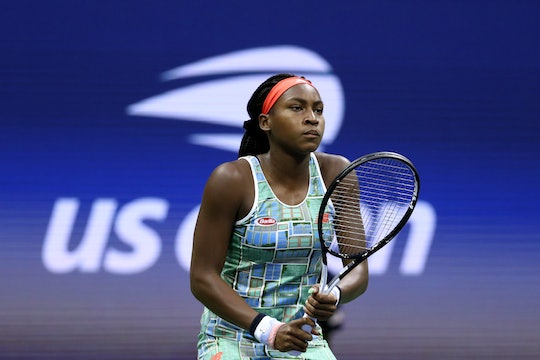 Everyone is talking about Coco Gauff. During the 2019 US Open, Gauff, who is just 15 years old, wowed the crowd with two major wins which quickly made her a fan favorite. Though Gauff lost in a third round match to Naomi Osaka, the impression she made while dominating the court at Arthur Ashe Stadium in New York City won't be fading away any time soon. So, who is Coco Gauff? There is plenty to learn about the up and coming tennis player, starting with the fact that Coco isn't her first name.

Gauff, born Cori, was born in Delray Beach, Florida and raised in Atlanta, Georgia. As a professional tennis player, Gauff has made it clear she wants to be referred to by her nickname, "Coco." To help with that, Gauff uses the hashtag "#CallMeCoco" on social media. Needless to say it worked, as one look at the tag on Twitter shows tens of thousands of tweets about the inspiring teen's rise to international tennis fame.

That kind of fame likely didn't seem too far fetched to Gauff, who decided to focus on her tennis career full-time when she was just 7 years old, according to Business Insider. Safe to say she made the right choice.

For Gauff, the apple did not fall far from the tree when it comes to a love of sports. Both of her parents, Corey and Candi, were college athletes. Corey played basketball at Georgia State, while Candi was a hurdler at Florida State, according to Good Housekeeping. Both parents left their jobs to focus on Gauff's tennis career, with Candi working as her daughter's homeschooler and Corey as her primary coach.

Gauff also has two younger siblings, Cody, 11, and Cameron, 6. Yes, all members of the Gauff family have names beginning with the letter "C."

She might not be old enough to vote yet, but Gauff has already defeated a Williams sister on the tennis court. In July 2019, Gauff and Venus Williams faced off in the first round of ladies singles to quality for Wimbledon. Not only did Gauff defeat Venus, but according to Wimbledon the win made her "the youngest player since 1991" to win that round.

Defeating Venus made for an interesting turn of tennis events, because it was Venus's sister, Serena Williams, who handpicked Gauff to train with her own personal coach in France, according to Business Insider. This was an incredible fete for Gauff, who grew up idolizing both Williams' sisters as she longed to become a tennis legend herself.

Though Gauff is out of the 2019 US Open, that certainly won't be the last time fans see her on the court. Due to her age, Gauff is limited to play only 12 professional events per year by the Women's Tennis Association (WTA). With the US Open now under her belt, Gauff is up to nine professional events for the year, which means she can still choose to play in up to three events before 2020.