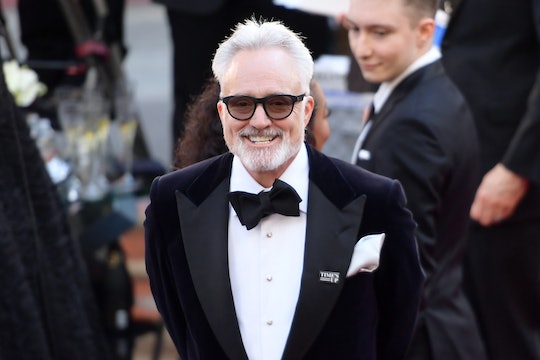 If you haven't seen Episode 12 of The Handmaid's Tale, wait before reading as this post contains spoilers!

After being rejected by four other commanders and their wives, Emily was taken to a new posting in Episode 12 of The Handmaid's Tale Season 2. She was deposited at the home of Commander Lawrence, a new character who proved incredibly hard to read. Who is Commander Lawrence on The Handmaid's Tale? That was probably the very question Emily was asking herself by the episode's end. Though his loyalties seemed to lie with Gilead, his evasiveness and lack of formality made him a difficult man to predict.

Some details are easy to pin down. According to Aunt Lydia, Commander Joseph Lawrence was the architect of Gilead's economy. That meant he was very high-ranking, and had probably been involved in the very conception of the Republic of Gilead. If he had his hands in the finances, then he was integral to creating the whole system. But he didn't act like other commanders who have been introduced throughout the show; whereas Fred Waterford and Warren Putnam stood on ceremony while secretly breaking the rules, something else seemed to be going on in the Lawrence home.

There was an unexpected level of animosity right from the start: Lawrence's Martha talked back to him, apparently without fear of recrimination (though like Janine, she was missing an eye), and Lawrence himself was rude and dismissive to everyone around him. He offered no direction to Emily, but he did make sure to threaten her when he caught her hovering by one of the many books cluttering the living room.

Lawrence's wife didn't come down to greet Emily upon her arrival, but she did make an appearance on that first day. When Emily was preparing to go to bed, Mrs. Lawrence appeared at her door asking questions. She wanted to know Emily's real name, then let slip something else about her husband: he was the one responsible for the Colonies, too. Mrs. Lawrence assured Emily that she hadn't been on board with the plan; she tried to tell him that it was inhumane to subject people to that kind of treatment, but he went through with it anyway. Lawrence's wife thought he was a monster.

Lawrence also did his research. After discovering his wife and Emily, he took Emily into his study for a glass of wine and a conversation. He revealed that he knew everything about her, including many of the details of her life before Gilead. He had obviously chosen Emily specifically, though it was unclear why. Perhaps he wanted to question her about her experience in the Colonies, but that remains to be seen.

Lawrence was a man of mixed messages. There was some amount of leeway under his roof if his Martha felt able to speak freely, but he also seemed to have a particular fondness for Gilead's most violent aspects. He looked disappointed that the penalty for reading was only losing a finger, not a hand (unlike the good old days). He knew all about the genital mutilation Emily had suffered. And, of course, his actions had resulted in the horrors of the Colonies. Emily's new posting put her in a very precarious position.

If Lawrence was familiar to you, that's because he was played by actor Bradley Whitford. Though perhaps most immediately recognizable for his role on The West Wing, he's been in countless TV shows, including Transparent and Brooklyn Nine-Nine. He has also appeared in quite a few movies, like Get Out, The Post, and The Cabin in the Woods.

Commander Lawrence might be a late new addition to Season 2 of The Handmaid's Tale, but it seems like this is only the beginning of a new story for Emily.