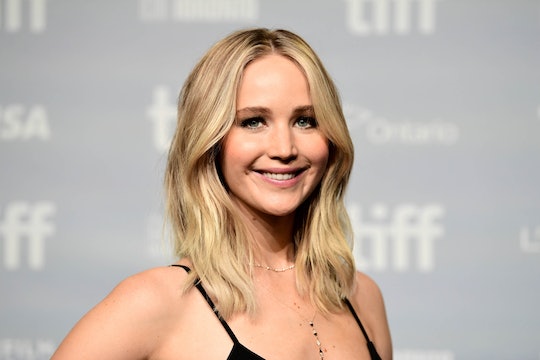 Everything You Need To Know About Jennifer Lawrence's Artsy Fiancé

Academy Award winner Jennifer Lawrence is used to her career being in the spotlight, but her personal life tends to fade into the background. So, people might have been a little surprised to wake up on Wednesday morning and learn that the actress is reportedly engaged to her boyfriend, Cooke Maroney. I know what people are thinking: who is Cooke Maroney? There's a bit people need to know about the future Mr. Jennifer Lawrence.

It was first reported that Lawrence and Maroney are engaged on Tuesday, after the two were spotted eating dinner in New York City and Lawrence was seen wearing a "massive ring" on that finger, according to Page Six. The couple has yet to officially confirm the news themselves in some kind of grand announcement on social media, but Lawrence's rep has confirmed their engagement to multiple news outlets, including E! News and People. (Romper's request for comment was not immediately returned.)

Still, it's unclear how Maroney proposed to Lawrence, or how long the couple has been engaged. But, if fans can't know more about their engagement, then they can at least know a little bit more about Maroney — an "art gallerist" with a career that is completely different from Lawrence's, according to E! News.

The couple's jobs could not be more different. Maroney, who is 34 years old, serves as the director of the Gladstone gallery in New York City, according to The Cut, and calls several high profile artists his clients. This means he spends all of his time surrounded by art, rather than acting in front of a camera like Lawrence.

But they share the same love of traveling, especially since their jobs allow them to. After their relationship began last summer in June 2018, according to E! News, the couple has been spotted in France and Italy together.

While Lawrence might be in the spotlight, Maroney tends to keep more of a low profile. He has an Instagram account, but it is private (no sharing the intimate details of his life with strangers, here). And there is not much else people know about him. This makes sense, though, since Maroney and Lawrence were reportedly introduced to each other through a mutual friend, according to Page Six.

But because Maroney keeps a low profile, there are only just a few photos of the couple together on the internet.

Maroney keeps such a low profile that even Lawrence hasn't said anything about their relationship since they've started dating, according to People. But, she has spoken about marriage in the past, according to E! News. In 2015, Lawrence told Vogue that she was excited to spend the rest of her life with a special person. Lawrence said:

I can't wait to be married. I feel like if I find that one person who I want to spend the rest of my life with, who I want to be the father of my children, that I would absolutely not f— it up. But I'm also not banking on that.

In spite of their low profile, the couple is reportedly very happy together. In August, a source told People that they have "great chemistry." "She is smiling like I have never seen her do with any of her previous boyfriends," the source told the publication.

Now that their very exciting news is out in the open, hopefully Lawrence will be more comfortable with talking about her relationship with her betrothed.