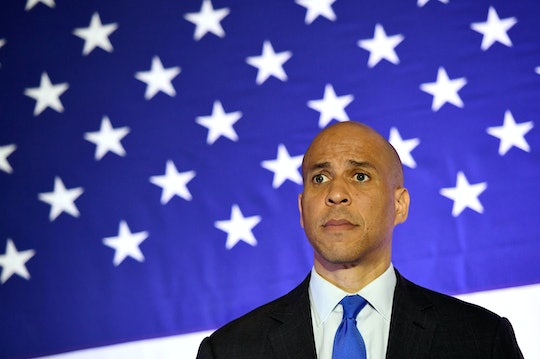 Presidential Hopeful Cory Booker Has A Special Lady In His Life

New Jersey Sen. Cory Booker is one of many Democratic hopefuls looking to replace President Donald Trump in the Oval Office. If elected, he would be one of the only unmarried men in history to be elected, according to The Root. But that isn't to say he doesn't have a lucky lady in his life. In fact, Cory Booker is dating someone pretty special who happens to be very famous outside of politics. That's right, he's dating actress, Rosario Dawson, and the couple is seriously cute together.

On Wednesday, Booker appeared on The Ellen DeGeneres Show where he talked about his presidential campaign, according to The Washington Post, in addition to spilling all of the beans about his relationship about Dawson to the one and only Ellen DeGeneres. Although Booker stated that he would have liked to keep their relationship out of the public eye, he was happy to talk about how much he admires the actress and activist.

"As our relationship grows, it's difficult, but she is such a deeply soulful person and has taught me a lot of lessons about love already," Booker said, according to TODAY. "Sometimes you show the greatest strength when you make yourself vulnerable."

He is seriously gushing when he talks about her, as he went on to say: "She really has this nurturing spirit that made me more courageous, not just in the love that I project and want to see in our country, but I think in our own personal relationships to love more fearlessly. I'm very, very blessed to be with somebody that makes me a better person."

And earlier this month, Dawson confirmed to TMZ that she is dating and is in love with Booker. "I am just grateful to be with someone that I love and admire so much," Dawson said, according to TMZ.

It was first reported that the couple was together in January this year, according to Page Six. And Booker hinted that he had someone special in his life during a interview on the radio show The Breakfast Club this February, according to CNN. "I'm dating someone really special...I got a boo," Booker said.

Although a candidate's love life has nothing to do with how they would lead the country, it's something that people love hearing about — especially since it's so rare to have an unmarried candidate. As previously stated, there have only been two unmarried presidents to be elected to office — James Buchanan (the 15th president) and Grover Cleveland (the 22nd president), according to The Root.

And if Booker is elected into office next year, he could very well be the third unmarried president, although he might not stay unmarried for too long. DeGeneres offered to marry the couple in the Oval Office, which would make for excellent TV.

But he isn't too worried about what voters think about his relationship status. "If Donald Trump can get elected with the personal life that he has? The anybody can," Booker said on The Breakfast Club, according to CNN.

Dawson is a huge star regardless of her relationship. The New York City born actress is known for her roles in the film adaptation of the musical, Rent, and the CW's Jane The Virgin, just to name a few. Dawson, who is now 39, got her start at 15 years old, when she was cast off the street in the movie Kids, according to Dazed. The rest was history. Since Dawson is such a loved actress and Booker is a popular politician, the two of them together makes for one serious power couple.

Actress and activist are two titles that Dawson already wears with pride, but First Lady could be a new title that would look excellent on her resume. A girl can dream, right?