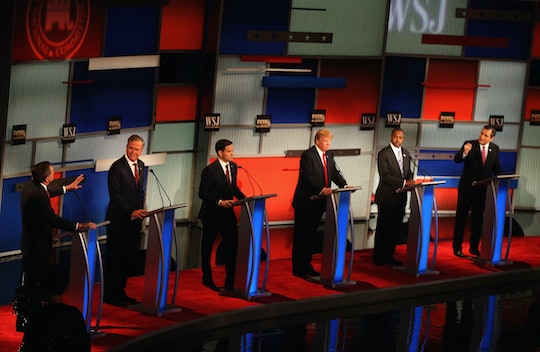 Who Is Coughing At The CNN GOP Debate? Someone Get This Guy A Cough Drop

The fifth GOP Debate was held Tuesday evening in Las Vegas, Nevada, showcasing nine hopeful Republican presidential candidates. While ISIS, radical Muslim terrorism and, well, Donald Trump, took center stage, viewers found themselves asking, "Who is coughing at the CNN GOP debate?" Yes, this is very important because I'm sorry but who can focus on what the candidates are even saying when all that coughing is happening??

UPDATE: Doug Watts, Carson’s communications director, told ABC News Wednesday morning that Carson was the mysterious, distracting debate cougher. He said Carson and his campaign team caught something about a month ago and have kept "a bagging cough" ever since, according to The Hill. He said Carson wasn't sick, "just working through this cough."

Because everyone noticed the noise. After all, it is cold and flu season. Not to mention each of the nine Republican party nominees have been on the road for months pitching their promises for a better future and rallying their supporters. Chances are the combination of exhaustion and vocal stress has taken a toll on their throats.

And the cough wasn't lost on Twitter users either, who tweeted about the continuous coughing. Perhaps a candidate's natural reaction to an already over-played debate stage is easier to comment on than Donald Trump's plan to deport all Muslim-Americans.

It is also worth mentioning that once the coughing ceased, Ted Cruz's unending need to re-hydrate by continually drinking from his water bottle became as equally distracting. Is it really that dry in Las Vegas? If he doing his best Rubio impression? Is this proof that global warming is really a thing?!