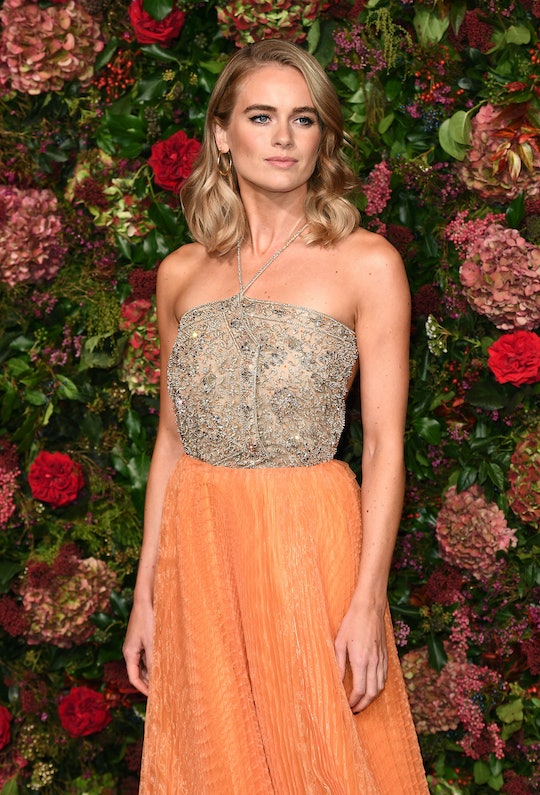 Long before Meghan Markle entered the scene, Prince Harry was in a longterm relationship with model and actress Cressida Bonas. The two eventually split and went their separate ways, with the Duke of Sussex marrying Markle in May 2018. But now it's Cressida Bonas turn to find love, as she's reportedly engaged to a guy who also happens to be named Harry. And if that detail has you hooked (I know I am), then you might be wondering: Who Is Cressida Bonas' fiance?

As for Bonas' relationship history, she dated Prince Harry, now Duke of Sussex, from 2012 to 2014, according to The Sun. The socialite has since found love with Harry Wentworth-Stanley, who she has dated for about two years, according to People. And Wentworth-Stanley was the one who broke the engagement news to Instagram, writing, "We getting married," accompanied by a beautiful photo of the happy couple in a field in Nantucket, Massachusetts. In the shot, Bonas sports a large, round engagement ring that looks like an heirloom piece, and features what appears to be rubies and diamonds.

Bonas, whose Instagram account appears to be more professionally-based, filled with examples of her recent magazine covers and theatrical appearances, did give several recent hints, however, that she deeply admires Wentworth-Stanley, who is involved with nonprofit James' Place UK. The center is the first non-clinical gathering place for men in suicidal crisis in Britain, according to its Instagram page.

Bonas' Instagram has posted several messages throughout the years in praise of James' Place and Wentworth-Stanley, calling him an "angel," a "friend" and wishing him happy birthday with heart emojis.

Bonas, who was originally introduced to Prince Harry through Princess Eugenie, as per Harper's Bazaar, was on good enough terms with her former flame for Bonas to be among the guests at the prince's wedding to Meghan Markle at Windsor Castle in May, 2018, People noted. The magazine added that Wentworth-Stanley himself also has royal connections.

Not only has he met with Prince William in connection with the royal's support for mental-health initiatives, the outlet outlined, but Wentworth-Stanley’s mother was a friend of Princess Diana’s and remains close with Sarah Ferguson, Eugenie's mom.

Adding to the list of coincidences? Wentworth-Stanley’s stepfather, George Mountbatten, 4th Marquess of Milford Haven, is also kind of royal, People explained. As a descendent of Princess Alice, the daughter of Queen Victoria, this means the groom's stepdad is Queen Elizabeth's cousin. Talk about a small world!

Interestingly enough, Bonas and Wentworth-Stanley reportedly dated prior to her getting together with Prince Harry, with the pair having been reunited for some two years now, according to the Daily Express.

In Bonas and Wentworth-Stanley's case, it sounds like true love won out in the end. So congrats to Prince Harry's ex for finding her happily ever after with another Harry!