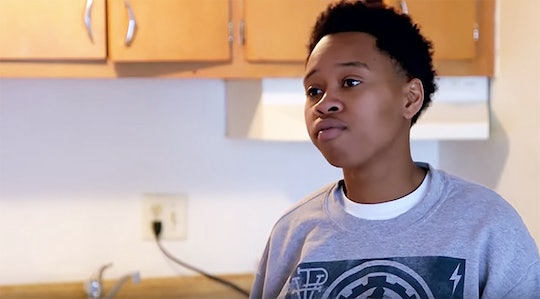 Some fans might remember Danae Hudson from his time on Young & Pregnant, when he was dating cast member Briana Jaramillo. The two have since broken up, and now he's in a relationship with someone new. So, who is Danae's girlfriend? Fans got to meet Danae's lady love in MTV's Being Danae special.

When viewers first met Danae, he was an active part of Briana's life and her pregnancy. The exes dated off and on for years, and reunited shortly after Briana became pregnant with her son, Braeson. Danae, a transgender man, decided to take on a father role in the little guy's life despite not having any ties to him biologically. "Me being trans, I can show him there is so much more to this world," Danae told Briana in the the Young and Pregnant trailer.

At the time, Danae was dealing with a bunch of personal issues related to his transition. His mother, for instance, wasn't happy about the change and refused to use Danae's correct pronouns.

“I’m sorry, I have to stop you. Everybody here is saying ‘he,’” Danae told his mom at a family function, according to People. “You keep saying ‘she,’ and it’s really kind of like …”

It looks like Monday's special, Being Danae, continues to cover Danae's fractured relationship with his mom.

"Brianna's ex Danae moves forward in his transition as a transgender man, but before he gets his top surgery, he needs to repair his strained relationship with his mom," the episode synopsis states.

It's unclear whether Danae will find peace with his mom, but one thing is clear: he has moved on from Briana.

In the special, viewers are introduced to Danae's new girlfriend, Sabrina. Her Instagram account bio reveals she's "21 years young, a Sagittarius, and has tattoos and piercings."

One clip shows Sabrina driving Danae to a top surgery consultation, which he finds nerve-wracking due to his recently revealed struggle with body dysmorphia.

"I'm happy I get to be here for you," Sabrina tells him. Aww.

As for personal details about Sabrina, her Instagram account reveals a few key facts about her life. For starters, she was very close to her late grandma, who passed away in 2015.

"One year ago today I lost the most beautiful person I know way too soon. I love and miss you more and more each day grandma," she captioned a shot of the pair. "You are forever in our hearts and I am so lucky to have an angel like you looking down on me. R.I.P grandma."

My heart goes out to Sabrina. It's very difficult to lose a loved one.

Luckily for Sabrina, she has Danae to lean on when she's feeling down. "Lil obsessed with his goofy a**," she captioned a sweet Instagram video of the two.

Danae is equally as smitten with Sabrina, who was there when he got his top surgery in February.

"We irritate each other but we still together," he joked in an Instagram caption.

It sounds like Danae has found a great partner in Sabrina. Congrats, guys.