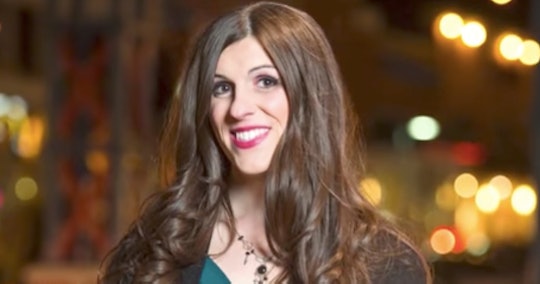 In his 26-year-long career in the Virginia House of Delegates, 73-year-old Republican Robert G. Marshall proved to be one of the state's most socially conservative, anti-LGBTQ lawmakers. Most recently, Marshall wrote and pushed for his own version of the controversial North Carolina anti-transgender "bathroom bill," according to The Independent, and has even actually referred to himself as Virginia's "chief homophobe," as though that is something to be proud of. But on Tuesday, voters took to the polls to show that they were definitely ready for a change. Who is Danica Roem? Virginia just elected its first openly transgender official, and it's a really big deal.

Roem, 33, a former journalist (and current heavy metal singer), defeated Marshall, a 13-term incumbent, with 54 percent of the vote, making her both the first transgender person to run for the Virginia House of Delegates as well as the first person to actually win. And given Marshall's staunch anti-LGBTQ position (he's also fought hard against same-sex marriage rights), it must have felt like a particularly sweet victory. According to The Washington Post, Marshall had gone as far as to outright refuse to debate Roem in the lead-up to the election, and also continued to refer to her using male pronouns instead of female.

Following her win Tuesday night, Roem told her supporters that she considered the victory to be not just hers, but one belonging to anyone who has ever felt like an outsider. According to The Independent, Roem said,

It's a message that seems to have gone over well among voters, and likely explains how Roem was able to raise nearly three times as much money in campaign donations as Marshall during her run — close to $500,000, according to The Washington Post. After the election results came in, Virginia Democratic leader David Toscano called Roem's victory "historic," according to The Guardian, and said that it "sends a message to politicians everywhere that the politics of bigotry is over." Planned Parenthood president Cecile Richards also chimed in to offer Roem her congratulations, tweeting, "Couldn't be more thrilled for Danica Roem. And good riddance to Bob Marshall, one of the most anti-choice, and anti-LGBTQ members of the VA House."

But as much as the Roem's win was rooted in the issue of gender identity, for many voters, it was also about something much less noteworthy: traffic. During her campaign, Roem emphasized her commitment to tackling the traffic congestion along Route 28, and in a June interview with Noisey, Roem explained why it would be wrong to assume that she was running just to make a statement about transgender rights. She said,

What a lot of people who aren't within the LGBTQ community don't always take into account is that the same issues that affect a lot of LGBT people affect everyone else, too. For example, if you commute up [Route 28] everyday, traffic is terrible. It was terrible there 25 years ago, when Delegate Marshall first took office, and it's terrible today. Guess what? Terrible traffic doesn't care if you're trans or if you're not trans, it doesn't care what the color of your skin is, it doesn't care about anything. It's traffic.

In fact, Roem explained that, for her, the issue of Route 28 congestion was a personal one. According to The Washington Post, she said that the reason she decided to run in the first place wasn't to fight back against Marshall's discriminatory position, but "because I’m fed up with the frickin’ road over in my home town.”

That definitely seems to be a message that resonated with voters: 50-year-old Virginia resident Nat King told the outlet, “That was the primary factor in how I voted. Someone has to fix Route 28.”

Despite her history-making night in Virgnia, Roem wasn't actually the only transgender candidate to win big on Tuesday night. In Minneapolis, Andrea Jenkins won a city council seat, making her the first openly transgender woman of color to be elected to public office, according to The Fader.

While Roem's campaign clearly emphasized that she decided to run specifically to focus on the day-to-day issues that Virginians want addressed, the huge significance of her win as it relates to inclusion and transgender rights can't really be ignored. At a time when the president is trying to ban transgender individuals from the military, and when politicians like Marshall are trying to argue about which bathroom transgender people can and cannot use, Roem's victory sends a hopeful message: while there are still many people who may feel threatened by diversity, there are also plenty of Americans who understand that a candidate's gender identity has no bearing on how well they will be able to do their job.