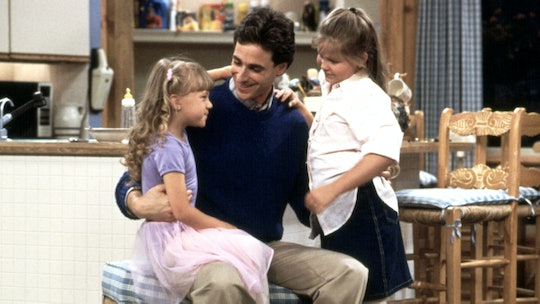 A lot of things have changed in the Tanner household on Fuller House, but the biggest addition to the family is Danny Tanner's wife, Teri Tanner. Played by CSI: Miami's Eva LaRue, Teri Tanner makes her first (and possibly only appearance) in the pilot episode. During the going away party, we see her and Danny hugging and planning their future. She expresses her need for "alone time" with him, and he jokes about getting out the feather duster in a way that is definitely more Bob Saget than Danny Tanner. Other than the fact that she has great arms (check them out) and wants to move out of the crowded house, fans don't learn much more information about her.

Even stranger is that if she was staying at the house why wasn't she at the breakfast? Where was she when Danny took the house off of the market? Shouldn't they be making decisions like this together? And why didn't she run out to watch Comet Jr. have puppies? Who doesn't to look at puppies?

Of course, it's nice that Danny has remarried after 29 years. But if they're going to give him a wife, like they gave D.J. and Kimmy kids, she should be hanging around the kitchen, eating fried chicken (why is there always fried chicken in the fridge?) and giving the grandkids some pep talks, right?

Though LaRue makes a great choice as the second Mrs. Tanner, early reports suggested Danny would be married to an African American woman. In June, TV Line reported that Fuller House's casting directors were looking for an African American to play Teri, who they described as "attractive, vivacious … and youthful." I'll admit, it would have been great to see Danny married to a woman of color, especially since Full House featured an all-white cast and hired very few African Americans to play the smaller roles.

It also would have been since to see Danny reunited with his former fiancé Vicky in Fuller House. Remember Vicky? For the longest time, Danny couldn't date because he missed Pam, his first wife, so much. But after striking up a friendship with Vicky while she filled in for Rebecca on Wake Up San Fransisco, he and Vicky dated for several seasons. They only ended it because she got a job offer in New York City, and Danny couldn't uproot his family just to follow her.

But despite his potential love interested, we're just happy to see Danny happy after all these years. And the fact that he found a woman who gets turned on by his Mr. Clean-like habits is just an added bonus.