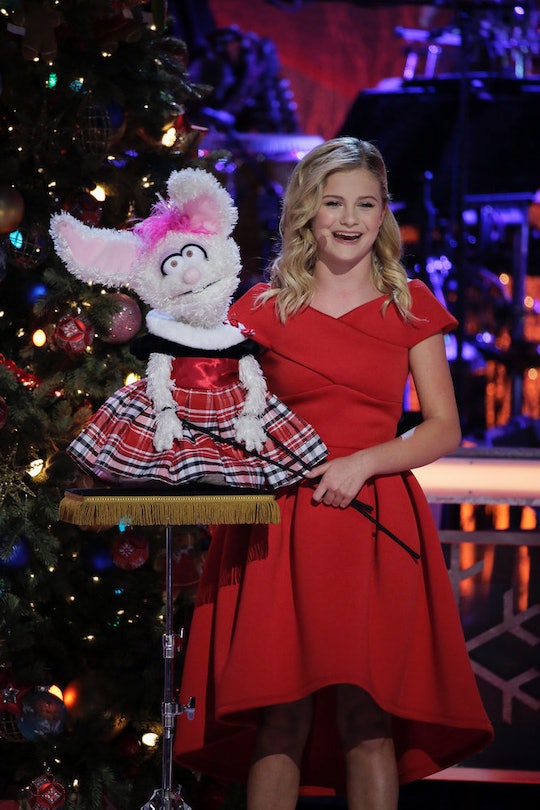 It’s always fun to watch star-studded celebrity specials around the holidays, and NBC’s new show, Darci Lynne: My Hometown Christmas, looks like it will be an exciting watch for the entire family. The host is a young TV phenomenon, but if you haven’t heard of her before, you’re probably wondering, who is Darci Lynne? She’s an America’s Got Talent winner, and she’s bringing her amazing act to NBC for the holidays.

Darci Lynne Farmer rose to fame on Season 12 of America’s Got Talent, where she wowed audiences with her singing-ventriloquist act. During her first audition for AGT, the Oklahoma-native impressed the judges by singing “Summertime” with her puppet Petunia, and the performance earned her a coveted Golden Buzzer straight into the finals. She told the judges that she wanted to keep ventriloquism alive, because the art was becoming increasingly uncommon. After weeks of jaw-dropping performances in the finals, Farmer emerged as AGT’s 2017 winner.

In an interview with The Tampa Bay Times, Farmer revealed that she started out as a shy kid, but through her experiences on stage — through singing competitions and pageants — she fell in love with ventriloquism, and that helped her break out of her shell. “It’s very fun for me, I love doing what I do, I’m very, very passionate about it,” she told the outlet. “What has been so great out of all of the success is that I inspired so many people to take up ventriloquism, especially little kids. That made my very happy because that was my initial goal, to try to keep it alive. That makes me happy and excited, and motivates me to keep doing it.”

In her new NBC special, Farmer will be performing alongside her adorable puppets and a few surprise celebrity guests, including Toby Keith, Hunter Hayes, and Kristin Chenoweth. When talking to KFOR News 4, she said that the special was filmed almost entirely in Oklahoma, including a few parts that were filmed at a facility for families with children battling cancer called the OK Kids Korral.

“I definitely wanted to shoot here at the Kids Korral because I came here a couple of months ago and performed for the kids and, when we started up the special, I was like it would be an amazing idea to bring Toby Keith here to perform for all of the kids and just to show what an amazing thing is going on here,” said Darci. “It was really special to perform with Toby and, you know, be in the moment here because all of the kids out there, I know they're going through a hard time right now, and struggling and in need of a smile or a laugh and I think we did that for them with his guitar and his music and Petunia. It all just came together nicely to help them have a special Christmas.”

According to NBC, there are a few other notable names that will be joining Farmer on her Christmas special. The acapella-singing group Pentatonix will be there, along with violinist Lindsey Stirling and AGT judges Simon Cowell, Howie Mandel, Heidi Klum and Mel B. Farmer’s puppets, Petunia, Edna, Katie, and Oscar will also join her on stage, and This Is Us star Lonnie Chavis will stop by for a holiday gift exchange. You’ll see performances of holiday classics like "Santa Baby," "What a Wonderful World" and "Santa Claus Is Coming to Town," along with Hunter Hayes new debut song, “This Christmas.”

With her colorful puppets, musical performances, and celebrity guests, Farmer’s special should be a treat to watch with the whole family.