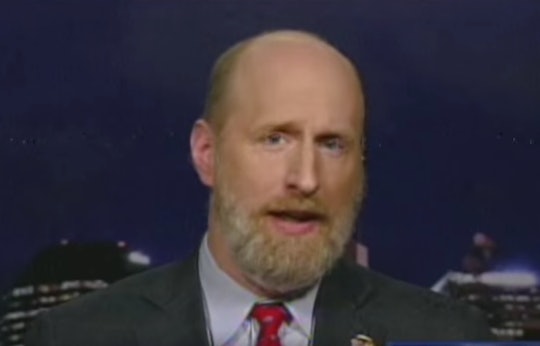 Who Is David French? The Conservative Lawyer Probably Isn't A Huge Threat To Donald Trump

As many Republicans start to reluctantly jump aboard the speeding train of doom that is the Donald Trump campaign, a few principled souls remain on the ground, desperately searching for someone else to rally behind. Now, Bloomberg reports that, with the support of top Republicans, conservative lawyer David French may run as an Independent. "Ah yes, of course. I've heard of him," said pretty much no one in response. So who is David French? While he certainly doesn't have the name recognition of Trump, he could make a few (likely small) waves if he decides to run.

Influential conservative columnist Bill Kristol, the editor of The Weekly Standard, has been working for some time now to find an alternative to Trump. Over the weekend, he tweeted a "heads up," saying, "There will be an independent candidate—an impressive one, with a strong team and a real chance." (In totally unsurprising news, the announcement lead Trump to go on a Twitter rant about how Kristol was a "dummy" and an "embarrassed loser." Stay classy, Donald.) Then, on Tuesday, Bloomberg Politics reported that the candidate in question was French, a war veteran, author, lawyer, and columnist for the National Review.

In a column Kristol wrote for the Weekly Standard about the need to find an alternative to Trump and Hillary Clinton, he floated French's name after mentioning other, more well-known possibilities like Mitt Romney, writing:

To say that [French] would be a better and a more responsible president than Hillary Clinton or Donald Trump is to state a truth that would become self-evident as more Americans got to know him.

French himself expressed support for a third-party campaign on his Twitter account, but he has not yet confirmed that he will run.

Already, many have pointed out that a candidate with such low name recognition and no actual political experience (New York Magazine referred to French as "a blogger") stands little-to-no-chance in an independent run. And there's been some backlash on other fronts, with critics quickly pointing to an old National Review article stating that French would not allow his wife Nancy to talk to other men via email or the phone while he was serving in Operation Iraqi Freedom (where he was awarded the Bronze Star). She wasn't even allowed on Facebook, where "the ghosts of boyfriends past" might initiate contact. But hey, that makes sense. We all know women can't be trusted around email!

All in all, French's chances don't seem promising. But if he does end up deciding to run, he'll surely find at least some Republicans who agree with his statement, in a recent column for the National Review, that, "The party of Lincoln is in ruins" due to Trump's ascension, and who much prefer a true conservative to an orange, xenophobic nightmare.