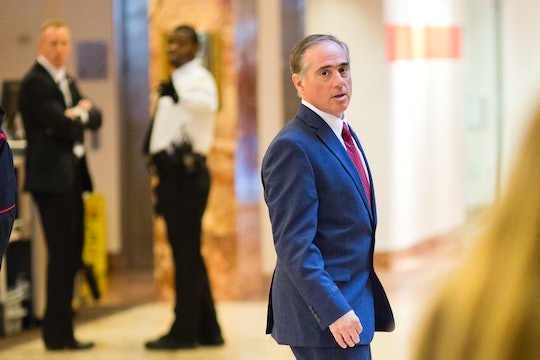 According to a press release issued by Donald Trump's presidential transition team on Wednesday, the president-elect has officially named his pick for Secretary of Veteran Affairs. David J. Shulkin, Trump's pick, has a long history working with the nation's veteran affairs, as he currently serves as Under Secretary for the VA's health department. Shulkin also has a long list of experience working with health services, serving as the Chief Medical Officer at over four hospitals. But, who exactly is David J. Shulkin?

While Shulkin has already lead quite an accomplished life and career spanning over 30 years, perhaps the most interesting aspect about this particular Trump pick is that Shulkin was actually nominated for the role of Under Secretary by President Obama.

At a time when it seems like Trump is readying himself to undo just about every action Obama put into place during his tenure as president, it's interesting to see him grasp onto a man appointed by Obama himself, especially since, according to The New York Times, Trump claimed during his press conference this morning that his team had interviewed "at least 100 people" for the position.

So, what exactly is it about Shulkin that Trump likes so much that he's willing to leave at least this one aspect of Obama's legacy untouched?

Well, perhaps the president-elect is actually trying to make an unbiased, smart decision. After all, Shulkin received his MD back in 1986, and has since worked as Chief Medical Officer, College Professor, and even served as a board member of a medical journal.

During his press conference, Trump made the statement that "our great veterans have not gotten the level of care they deserve," pointing towards Shulkin's long career as an answer to the problems of veteran's health care.

Trump's opinions on veterans themselves have sometimes come across as controversial. In fact, the president-elect came under a lot of flack during his campaign when he seemed to refer to veterans with PTSD as not being as strong as their fellow vets, though now-National Security Adviser designate Gen. Michael Flynn at the time defended Trump, saying, "Mr. Trump was highlighting the challenges veterans face when returning home after serving their country. He has always respected the service and sacrifice of our military men and women—proposing reforms to Veteran Affairs to adequately address the various issues veterans face when they return home."

What can be verified, though, is that the search for Trump's VA Secretary hasn't been an easy journey. In an article by The Washington Post this Monday, Shulkin wasn't even named as a top pick, with claims that the challenge wasn't finding someone Trump liked, per se, but finding someone willing to take on the challenging position.

Apparently, Trump has finally found his man, and we can only hope that Shulkin will bring his high levels of expertise to the VA, to help serve our veterans just as they have served us.