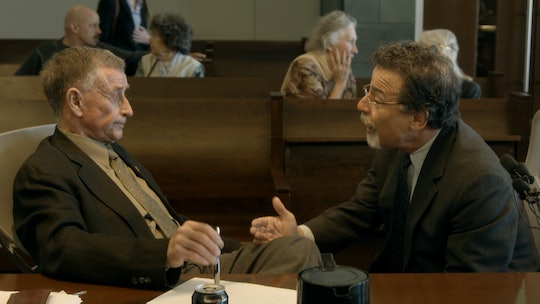 After being arrested for the murder of his second wife, Kathleen Peterson, Michael Peterson was convicted and sentenced to life in prison. Recently, however, he was able to secure a release through a plea deal thanks to his team of lawyers. That has many people wondering, who is David Rudolf in The Staircase? Learning about the North Carolina attorney can give you a little more insight into how Michael was defended in court. With the Netflix continuation of The Staircase set to debut on June 8, it might be good to become more familiar with the key players in the case. (Romper reached out to Michael Peterson's representatives and Netflix for additional statements.)

David Rudolf is a defense lawyer at Rudolf Widenhouse in North Carolina. After getting his law degree from New York University School of Law, he worked at the Federal Defender office in Brooklyn and his time there made him realize he "wanted to encourage new law students to represent poor people," per his website. He led a Criminal Law Clinic at the University of North Carolina School of Law but decided that he missed being in the courtroom. That was what inspired him to open his own firm in 1982.

According to Rudolf, one thing remained constant in the three decades of operating Rudolf Widenhouse: he still has "a commitment to individuals who need our help against the power of the government."

Rudolf appears in The Staircase, but also discussed how he became involved in the case on his website. He wrote that his firm was hired "about a week after Kathleen's death, when it became clear that the police believed Michael was responsible." Michael's brother, Bill Peterson, was an attorney and referrals led him to Rudolf Widenhouse. Interviewing Michael led Rudolf to believe his side of the story: that he and Kathleen had a very happy marriage and there was no reason for him to kill her.

"Based on our investigation, I believed that Michael had nothing to do with Kathleen's death," Rudolf wrote. "After 17 years, I still believe that." While the prosecutors put forth the theory that Michael beat Kathleen and she died from the resultant injuries (she had bruises on her arms, as well as wounds to the back of her head), Rudolf's version of the night in question was different.

According to ABC News, the defense claimed that there were no typical signs of a beating, such as skull fractures, brain contusions, or brain swelling. Forensic expert Henry Lee testified that the blood splatter evidence indicated a fall, so the defense speculated that Kathleen had been drunk and slipped down the stairs. Rudolf said, "She fell, and she bled to death."

Despite Rudolf's efforts, Michael was convicted and sentenced to life in prison. It seems Rudolf was absent from Michael's defense team in the intervening years, but recently returned to the case and was able to secure Michael the plea deal that allowed for his release. Michael entered an Alford plea, through which he could simultaneously maintain his innocence while pleading guilty to manslaughter. In an Alford plea, one admits that there is enough evidence to prove they are guilty even though they insist they did not commit the crime in question. Michael was able to walk free on time served. To the News & Observer, Rudolf said:

He's entering this plea because it is 15 years. He served eight years for a crime he did not commit. He's 73 years old, and he has no faith in Durham Law Enforcement being interested in the truth as opposed to being interested in convicting him and twisting evidence to that purpose.

David Rudolf appears to be one of Michael's biggest supporters and has believed in his innocence since taking on the case in 2001, despite the fact that Michael was legally found guilty. Though Rudolf has defended other high profile clients — including Rae Carruth and Reade Seligmann — his involvement in Michael Peterson's case has proved to be one of the most definitive of his career.