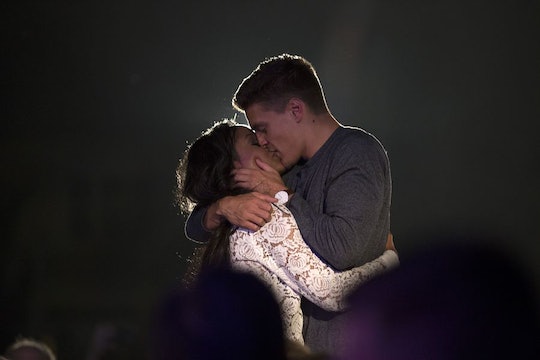 Dean Opened Up About His Dad On 'The Bachelorette'

After a supremely awkward one-on-one date, Rachel finally cracked Dean's light-hearted, joking exterior to find out what he was hiding during their final meeting before hometown dates. It turns out that he was stressing about potentially introducing Rachel to his "dysfunctional patriarchal family," but she was actually super compassionate about his difficult home situation. Dean's mom died when he was 15, which he had previously opened up about, but after her death, his family withdrew into their grief, leaving him feeling abandoned as the youngest sibling left at home. So who is Dean's dad on The Bachelorette? It sounds like he really struggled to adjust to being a single dad following his wife's death.

On their second one-on-one date, Dean explained to Rachel that, while his dad took him on plenty of outdoorsy bonding outings, he wasn't necessarily the parent who checked in with Dean's day-to-day feelings, personal growth, and life in general. And since all of Dean's siblings had already left home, he was left feeling pretty alone, with a dad who was deeply grieving and ill-equipped to parent in an emotionally supported way. Dean also mentioned to Rachel that his father had grown more and more "eccentric" in the years since he's left home, worrying that she might feel uncomfortable with his family dynamic.

Back in 2011, investigators suspected that an arsonist reportedly set fire to Dean's father's two-story house in the Willits subdivision of Basalt. Dean's dad, Harold "Chip" Unglert, was living there at the time with two renters, and had been suffering financial problems, according to an in-depth report on the incident in the Post Independent. The house was reportedly in the process of being foreclosed on, which threw suspicion on Chip as the possible arsonist. He denied any involvement and another report a year later revealed that the case had run cold and no one had ever been charged, according to the Aspen Times. The house was finally scheduled to be torn down in 2012.

Unglert said he met with investigators on Friday and heard their theory about the fire being deliberately set. 'That’s like a bunch of —t if I’ve ever heard some,' he said.

He didn’t feel that the CBI agent was a 'professional.' Based on the summary of their findings provided to him, he said he felt the investigation was 'incompetent and incomplete.'

Unglert said his meeting with a police officer wasn’t productive. He couldn’t remember the officer’s name, but said it might be Curry, who is leading the investigation. He said the officer kept asking him the same question, suggesting Unglert started the fire because of financial problems. Unglert said he refused to go to police headquarters based on his perception of their investigation.

'I feel like they’re picking on me or harassing me,' Unglert said.

Having previously worked in construction, Chip now works at Earth Oracle Yoga Studio in Carbondale, Colorado under the name Paramroop Singh Khalsa. According to his bio on the website:

Paramroop has lived in the valley for over 16 years with his family of 4 and late wife Debra. Paramroop is a master craftsmen of tile and stonework and ran Davinci Stone Works in Carbondale for 8 years. He helps organize morning Sadhana at the Studio. Currently a seva dar, he is in the process of becoming a teacher and offering his healing.

The house we see him living in during a sneak peek of hometown visits is obviously a much smaller one than the more affluent-looking two-story home in which Dean presumably grew up. It's unclear how much of this backstory he'll get into on the show, but it's obvious that his mother's death pulled the rug out from under the Unglert family in more ways than one. Luckily, Rachel seems deeply compassionate about the whole thing. Hopefully, ABC will treat the situation with dignity and Dean won't come out feeling too scathed on national television.