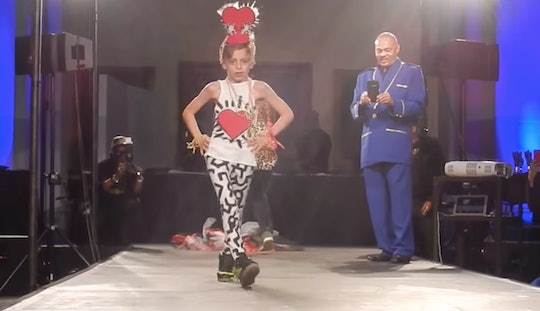 Get ready to meet your latest obsession. Desmond Napoles, the 10-year-old self-proclaimed "drag kid" who stole the show at New York Fashion Week has officially arrived and he's not going anywhere any time soon. More than just a pretty face, this young model is also an LGBTQ rights activist and a powerful voice on social media. At such a young age, he is already making quite the name for himself.

Napoles made his Fashion Week debut on Sunday, when he did his little turn on the catwalk during Gypsy Sport's Fall 2018 show in New York City, as reported by The Cut. He shared photos of his Fashion Week experience on Instagram, much to the delight of his over 90,000 followers, as well as a short description of who he is. "I'm a drag kid, dragutante, dragketeer, and draganista doing what I like to call kinderdrag," he wrote on Instagram. "I'm a total drag slayer."

Napoles went on to explain that he is the youngest member of the House of UltraOmni, a voguing ballroom house. And his post wouldn't be complete without a shoutout to all of those who have his back. "I have the best fans, my AMAZIES! I am sincerely grateful for your love and support," he wrote.

He also shared an explanation of his style and some of his inspirations. Pulling from both fashion and art, he has a broad range of interests:

I call my looks 'androgynously' and my style 'avant drag'. I'm inspired by RuPaul, the fashions of the Club Kids and Blitz Kids, the artists Andy Warhol and Keith Haring, designers John Galliano, Alexander McQueen, and Commes Des Garçons, Nelson Sullivan videos, altdrag, and do-it-yourself drag. I design or style my own outfits..

Napoles is also active in the LGBTQ community and founded his own drag house that caters to kids like him, according to Cosmopolitan. He shared these experiences in his post as well:

I'm an awarded LGBTQ advocate. Marsha P. Johnson is a huge inspiration and motivation for me. My motto is "Be Yourself, Always" I am also the founder of the first drag house for drag kids, the @hausofamazing, set to open for membership soon (tentatively March 2018).

Born in New York City in 2007 during Pride Week, Napoles told Vogue that he came out of the closet as soon as he was born. He has been enjoying a passion for fashion since Day One, wearing dresses at age 6 when he went as Elsa from Frozen for Halloween. His list of accomplishments include performing in a RuPaul's Drag Race music video and founding his drag house, Haus of Amazing.

This was his first experience walking in a NYFW fashion show, and it was one for the books. He posted to Instagram the night before the show, saying, “I am dying! Literally dying right now! My first time walking in @nyfw," but I have a feeling that this won't be his last.

For those questioning if his parents have pressured him into his lifestyle, think again. Napoles told Daily Beast that they have been nothing but supporters of his dream. "My parents are not forcing me at all. This is what I wanted to do, and this is what I always want to do for the rest of my life," he told the news outlet. "I just love their support, it’s fabulous."

His mother, Wendylou, also spoke with Daily Beast about the way Napoles chooses to live his life. For her, it was a natural decision to help him to chase his fashion dreams:

I mean we accepted it because we would rather he feel comfortable with himself. If someone has such a deep interest, you’re just going to indulge them in it. Like if your kid was so crazy about football, you’d take them to the game.

So, what's next for the Wunderkind? He told The Cut on Sunday that he hopes to go onto Paris Fashion Week and one day land a Vogue cover shoot. For now, you can keep up with him and his adventures on Instagram. I can promise you that you won't be bored.