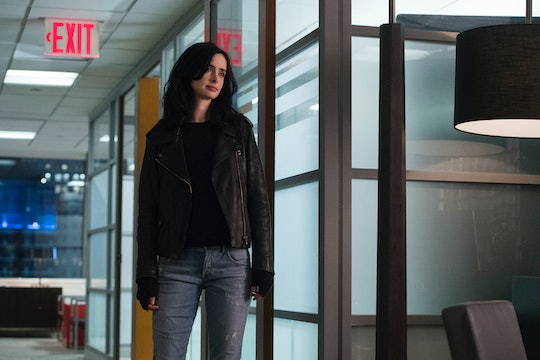 Warning: this post contains spoilers from Season 2 Episode 5. With each passing episode, the mystery behind IGH gets bigger and bigger, leaving Jessica (and the viewers) with even more questions. After discovering that the murder of a nurse at IGH was pinned on a man named Dave, Jessica paid him a visit. That's when he revealed he was close with someone named Dr. Karl, but who is Dr. Karl on Jessica Jones? Jessica has met him before.

Ever since Jessica decided to learn more about her past, she's been led down a rabbit hole that doesn't seem to have an end in sight. After finding Inez, a nurse who worked for IGH and was hurt by the incredibly strong woman Jess is now chasing, Jessica learned that another nurse, Luanne, was killed by the other super woman. However, just like the woman was able to pin Pryce's friend's murder on Jessica, she also got Luanne's murder pinned on Dave, a janitor at IGH.

Because he had the "mind of a four year old" he was locked up in a psychiatric prison. Thankfully, Jess' new super (and love interest) is skilled with making fake IDs, and Jess was able to pretend to be a psychiatrist and talk to Dave for a bit to help get to the bottom of everything. Although Dave was adamant that he was the one who killed Luanne, once Jessica got him talking about octopuses, his favorite animal, that's when he mentioned Dr. Karl.

Unlike some other characters on Jessica Jones, Dr. Karl was actually in the Marvel Comics, at least if you're assuming Dr. Karl is also Dr. Karl Malus, which seems accurate. In the comics, Dr. Karl was a mad scientist who was interested in genetic manipulation. This is exactly what Dave says Dr. Karl taught him about the octopuses they would visit at the aquarium. Dr. Karl was also interested in the creation of super-powered beings in the comics, which would explain why he was working in IGH and why Jessica remembered him in her flashbacks. No doubt he played a major role in the experimentation that was done on her, which gave her super strength.

Dr. Karl was responsible for giving a number of Marvel characters there abilities in the comics, so the fact that he would be connected to Jessica on the TV series isn't too much of a stretch. However, she isn't the only one he's connected to in this story.

Thanks to a drawing done by Dave, Jessica was able to locate the aquarium, where he and Dr. Karl would have their talks. Naturally, she then proceeded to stake it out. Though it took some time, she eventually spotted Dr. Karl, and while he initially arrived alone, he was quickly joined by the mysterious super-woman that Jessica has been after. The pair then shared a kiss, which means they're not only working together but they're also in some kind of relationship. One has to wonder if their romantic relationship began before or after she was a patient of his. Either way, this definitely makes things more interesting.

Unfortunately, Jessica wasn't able to learn much else because before she could even think of what to do next, Dr. Karl spotted and recognized her, causing the other woman to lash out and break the glass of the aquarium nearest to her. Though Jessica attempted to follow them, the glass of the aquarium shattered, stopping her, but I'm sure we'll see Dr. Karl again in the future and hopefully learn more about what he's been doing for IGH and — perhaps more importantly — why?