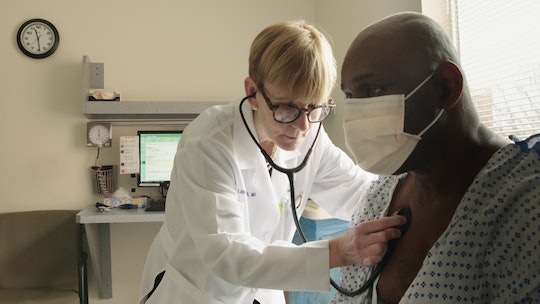 Dr. Lisa Sanders Is On A Mission In 'Diagnosis'

If Netflix's docuseries Diagnosis has a protagonist, it is the enigmatic doctor and sometimes New York Times columnist who is on a mission to provide answers for people living with rare diseases. Perhaps you're wondering: Who Is Dr. Lisa Sanders from Diagnosis? Well how much time do you have? Dr. Sanders is a primary care physician and Associate Professor of General Medicine at Yale, yes, but she actually does more than just this. She also uses her knowledge and resources to diagnose the undiagnosable with the help of the New York Times. I stan.

Believe it or not, Lisa Sanders didn't begin her career as a doctor. She began her collegiate career studying English at the College of William And Mary where she wrote for The Flat Hat, the college newspaper — according to her Yale School of Medicine bio. As a journalist she worked at ABC's Good Morning America and won an Emmy for her coverage of Hurricane Hugo when it barreled through her hometown of Charleston, SC in 1989.

Years into her journalism career, she decided to study medicine because, of all of the topics she'd covered, it interested her the most. She was accepted to Yale School Of Medicine “as part of the 10 percent of the class they reserve for weirdos,” her bio reports her saying. It was probably a joke, but the fact that she considers herself an outsider is actually integral to her medical career.

Dr. Sanders' research is primarily dedicated to the process and "art" of diagnosing patients, and in many ways it guided the trajectory of her career. Her diagnostic talents led her to become a medical technical advisor on House, the popular medical drama that ran on FOX from 2004-2012. Of course, all of this is in addition to authoring the popular New York Times magazine column "Diagnosis" and a column called "Think Like A Doctor" on the Times blog, The Well.

In partnership with The New York Times, Sanders' "Diagnosis" column became the basis for the seven-episode docuseries on Netflix, Diagnosis.

In the series Dr. Sanders helps seven previously undiagnosed patients discover what their symptoms mean. Sanders' New York Times column reaches millions all across the globe and in the series Sanders leverages that reach through social media — effectively crowdsourcing diagnoses for those who feel totally stuck. People around the world respond to Sanders' column. including doctors, veterinarians, journalists, or simply people with the same symptoms, and offer their own ideas on what the problem might be. After all, a hundred thousand heads are better than one.

In many cases, Dr. Sanders' patients on Diagnosis come to her after years of reaching dead ends with other doctors. But she has said the frustration of misdiagnosis could be largely avoided if the U.S. healthcare system valued thinking and listening over doing, per NPR. "Doing is what really counts, thinking not so much," she said "So, I would certainly encourage reform to allow for people to think because it's thinking fundamentally that's going to save us money."

Until such health care reform actually becomes a reality, however, Sanders is calling on all available minds to lend their own two cents — because it's saving lives.

Diagnosis is now streaming on Netflix.

This article was originally published on Aug. 15, 2019