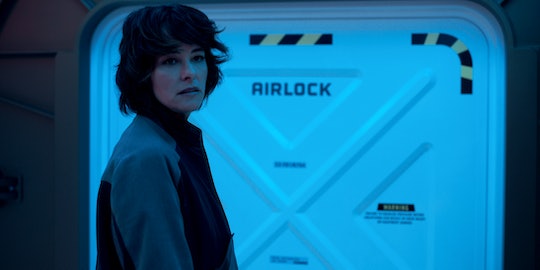 Dr. Smith's Complicated Backstory Is Revealed On 'Lost In Space'

Warning: spoilers ahead for Episode 3! It's been clear since her introduction on Lost in Space that Dr. Smith isn't who she says she is. Viewers saw her adopt her doctoral identity in Episode 2, when she stole the jacket of the real Dr. Z. Smith before helping herself to one of the Jupiter ships. But even though she was quite obviously lying, it took until Episode 3 to find out who Dr. Smith is on Lost in Space.

The third episode opened with Dr. Smith having a tense conversation with her sister Jessica Harris, played by Selma Blair. Jess and Smith were polar opposites in appearance: Jess was prim and put-together, as befitting the elegant mansion she seemed to live in, while Smith was disheveled with a distinctly punk flair. Jess wanted Smith to take responsibility for unspecified choices, whereas Smith clearly thought Jess had been handed countless opportunities that she herself had not been afforded. Jess pointed out that Smith didn't inherit the family business because she was a criminal, calling Smith by her real name at the same time: June.

In the course of their conversation, Jess revealed that she was the one set to leave on a Jupiter ship to explore new worlds. Smith wanted to come along, but Jess was unwilling; according to her, they "didn't want mistakes in the new world." As a consolation, she was going to pass along all her worldly possessions to Smith, including her house, car, and wardrobe. She wanted Smith to start fresh. And Dr. Smith wanted that too — just not in the way Jess thought.

Smith began to openly weep about the opportunity to live in Jess' house and wear her clothes, declaring, "I could just be you." At that point, Jess seemed to realize something was amiss and moments later she passed out, apparently drugged. Smith dug out a chip embedded in Jess' arm and re-styled herself to look exactly like her sister, complete with a wig. She left Jess tied up and gagged in the house, then went off to take her opportunity on the Jupiter.

As fans saw, Smith adopts and dismisses identities as they suit her. She used Jess to get initial access to a ship, then used the real Dr. Smith to escape a Robot on a rampage. When called upon for medical assistance, she deferred that she was a therapist; when she needed to win over a friendly mechanic, she made up a brother who he supposedly reminded her of. Smith can come up with a useful lie at the drop of a hat, and she has no problem abandoning other people to dangerous situations if it means she'll survive. And based on Jess' words, that seems to be common behavior for Smith.

Flashbacks revealed what happened to Smith in between leaving her sister's house and adopting the doctor's identity. A run-in with Jess' married boyfriend resulted in Smith losing her wig and flinging him out into space, yet again sacrificing someone else so that she could maintain her lies. But she didn't get to maintain them for much longer, because cameras caught the whole thing and she was hauled in for punishment. While in the office of the man in charge, he regaled her with her past crimes, which included breaking and entering, possession of stolen goods, and identity theft. Now that she'd graduated to murder, he was going to make sure she got her comeuppance — but Robot's attack caused enough chaos to allow her to sneak away.

Dr. Smith's criminal activities make her an unpredictable presence to have on the Robinsons' ship, and there's no telling what trouble she'll get them into as the season progresses. But the family will have to find out about her dishonesty before they can decide what to do about it, and Smith is so good at cooking up stories that it might take some time before that happens.