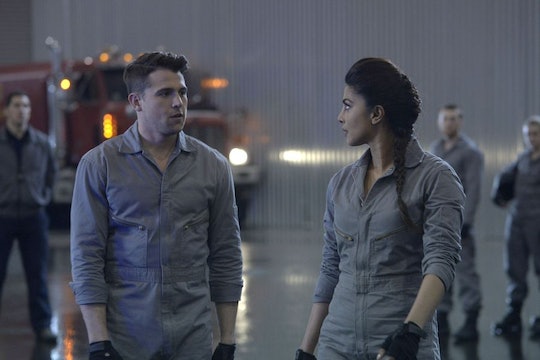 Who Is Drew Perales On 'Quantico'? Lenny Platt Plays The Newest All-Star NAT

There are some new faces on ABC's Quantico, and after the midseason premiere you might be wondering what their deal is. Personally, I'm skeptical of just about everyone on this show. I don't care if you seem like the most innocent person to ever join the FBI, you're on my list. And now we have new people to add to the list of people to be skeptical of, and at the top of it is the handsome new NAT on Quantico, Drew Perales, played by Lenny Platt.

On the midseason premiere, we learned that the class one month above Alex Parrish's NAT class would be teaming up to form one big class of future agents. Among them is Drew, a top-performing NAT who is definitely going to cause a stir among the previous class. The upperclass NATs are smarter, stronger, and it seems like Drew embodies all of those characteristics, so expect him to ruffle a few feathers.

So, what is there to know about Drew Perales? In an interview with Hypable, Platt says that Drew is an ex-NFL player turned NAT. Why he decided to become an agent is hopefully something we'll learn as the season progresses, but his football past definitely adds something new to the current roster of NATs. Unless one of the agents comes from a movie star background, I think Drew is definitely winning the "two truths and a lie" icebreaker game at the beginning of the semester.

Also, don't expect Drew to get along with everyone. Something tells me this guy is going to get into a few confrontations during his time in training, specifically with the guy in charge, Liam. He seems to be very driven, but sometimes that conflicts with authority on the show.

I'm also hopeful of a romance coming from Drew joining forces with Alex's class. I don't know who he'd pair up with, but I'm just saying, I'm really tired of Booth and I think that we can probably do better and upgrade to someone like Drew.

We have yet to see Drew in the post-bombing, which kind of worries me about his future on the show. Does he actually graduate and become an agent, or does something go wrong, causing him to leave Quantico and back to coaching little league football?