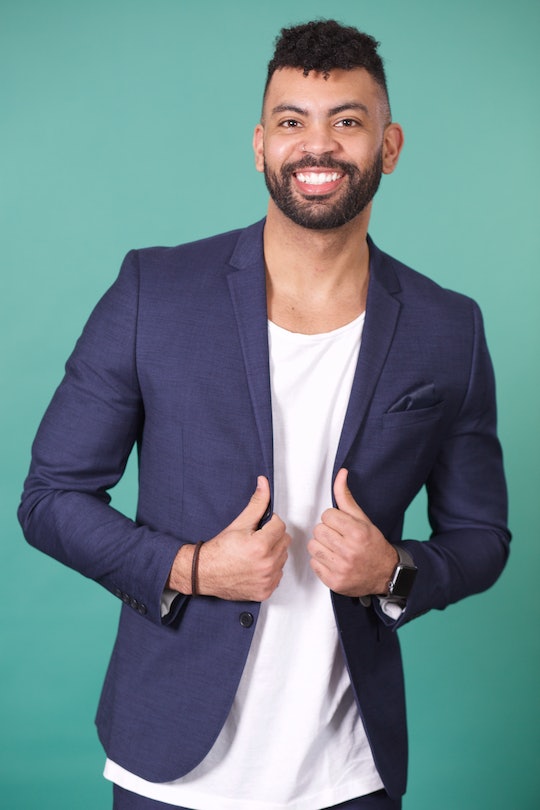 If you missed Season 23 of The Bachelor: After the Final Rose, you missed meeting the first of five available men vying for Bachelorette Hannah's heart. Even if you did watch, memories of who those men are may have faded and you might be wondering "who the heck are these dudes pulling into the mansion driveway?" It's cool, because I forgot about the first five, too. One of them, you'll probably remember the moment I re-introduce you. So, who is Dustin K. on The Bachelorette?

If you rewind back to After the Final Rose, Dustin was the suitor whose first impression came with champagne glasses. He claimed to be terrible at toasts, but then proceeded to make an OK-ish salutation (at least it was better than Hannah's with Colton). There was an awkward clink, and friendly "nice to meet you," and that was that. After creeping his Instagram page — which was private at one time — I've found that Dustin is a model and real estate broker from Chicago, repped by 10 Management. After further sleuthing, Dustin's LinkedIn page revealed he attended Northeastern Illinois University where he received a Bachelor of Fine Arts in Graphic Design.

All of that is cool, but the most important thing you should know about this guy is that he has an English bulldog — who has her own Instagram account. That's right. Literally stop what you're doing and check out Sophie_Soso_Saucey. It doesn't matter if there hasn't been an update since Jan. 6. Priorities, people; dogs are involved here.

Hannah will have her hands full throughout Season 15 of The Bachelorette, and I don't just mean with the striking good looks from Toastmaster, Dustin. If you don't recall, "Hannah Beast" put her heart on the line during Season 23 of The Bachelor, when she told Colton she loved him and was sent home immediately after. This was way before the epic fence jump, if you need a timeline to process your feelings. But, thanks to Bachelor Nation gods that be, the southern bell and former Miss Alabama USA gets a redemption arc of her very own.

Season 15 of the franchise will start with a bang. Two of Hannah's friends from Colton's season of The Bachelorette, Demi and Katie, are running surveillance from a high tech van while each of the men do their formal Bachelorette driveway introduction thing. It'll be interesting to see if a) Hannah remembers Dustin and his toast, b) if she feels a spark, and c) if he elicits her signature Hannah B. growl (no one good gets the growl, FYI). Regardless of how it goes, Hannah will eliminate a few, leaving her with 22 vying for a rose at the end of Ep. 1. I don't know if Dustin will be one of them, but I'd use the dog thing as often as possible. Always lead with a dog, fellas.

I have no doubt Dustin will leave an impression, regardless of how that awkward first meeting and toast went. Even if he hadn't been one of the First Five, there's something magical about this realtor model. If you think I'm still talking about his adorable dog with the pointed tooth the answer is yes. Yes, I am.