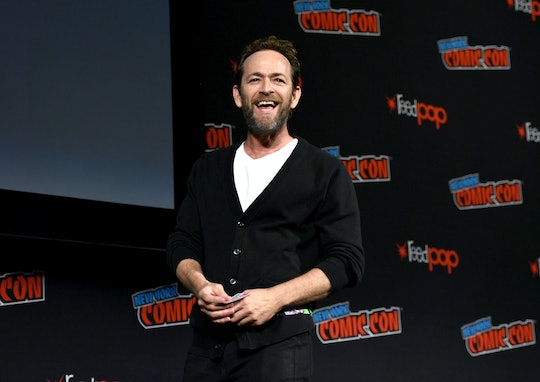 Fans of the original Beverly Hills 90210 may have felt an absence on the premiere of the Fox reboot. Luke Perry was a principle cast member of the hit '90s drama as resident heartthrob, Dylan McKay. But Perry sadly died in early 2019, before the show's revival. New viewers a little less familiar with the classic show may wonder who Dylan McKay is. As a longtime fan, his absence means this reboot will always feel bittersweet for me.

Seeing as Perry was among the first cast members to suggest a possible a BH90210 reunion, the reboot makes sure to memorialize the late actor. There would be no BH90210 new or old, without Perry's too-cool Dylan McKay, in my opinion. He is a staple to the BH90210 cast, and has been since its inception, so the premiere's references to him were more than necessary.

One the show, Dylan was the son of business tycoon, Jack, and ex-wife Iris. The designated "bad boy" of the group, Dylan was never really as "bad" as everyone thought him to be. He was quickly befriended by Brandon Walsh (Jason Priestly), and brought into the group that included Brenda Walsh (Shannon Doherty), Kelly Taylor (Jennie Garth), Steve Sanders (Ian Ziering), David Silver (Brian Austin Green), Andrea Zuckerman (Gabrielle Carteris), and Donna Martin (Tori Spelling).

If you're new to this world, it's important to know that Dylan was known best for his love life. He first fell deeply in love with Brenda, against her father's wishes of course, before falling even more in love with Kelly — before Kelly and Brandon were a thing — which explains some of that angst in the reboot. The Brenda/Kelly/Dylan triangle became the gold standard for teen soap operas for years to come.

It was hard to dislike Dylan, despite his penchant for self-destructive behavior. It's impossible to imagine the show without him, and yet that is what fans are left with right now.

Perry, whom you might also remember from Riverdale, passed from a massive stroke in March, leaving friends, family, and fans alike shaken by the loss. But his death is the reason Doherty joined the reboot. She told People, "For me, as these guys know, I definitely wasn’t going to do it," she said. "Nothing against the show, I knew it would get sold and do well without me. They didn’t need me. At that moment it wasn’t what I wanted to be doing." But Perry's passing had a profound effect on how she felt about the project.

"When Luke [Perry] passed away, things drastically changed for me and I felt like it was a great opportunity to honor him," she explained. "And I’m really glad I made that decision because now I get to sit up here with a lot of people that I respect and love."

The character Dylan McKay was almost as beloved as the actor who played him. While the reboot couldn't include Perry, his memory remains fresh in the minds of costars and fans. And if nothing else, BH90210 introduced Dylan to a whole new generation of fans.