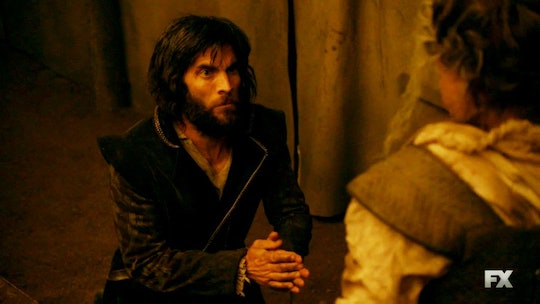 Who Is Dylan On 'AHS: Roanoke'? Wes Bentley's New Character Has Twitter Stumped

We only have two episodes of American Horror Story: Roanoke remaining, and yet the show is continuing to throw twists at us at every turn. As the Roanoke houseguests dwindled in number, we certainly weren't expecting any new faces to show up. Yet, in the final moments of "Chapter 8," viewers (and a traumatized Lee and Audrey) were greeted by a stranger showing up at the door of the house as they were trying to book it out of there. But who is Dylan on American Horror Story: Roanoke? And how will he fit into the rest of the remaining story?

By the end of the hour, only Lee and Audrey had made it back to the house alive. Monet, who escaped the Polk farm shortly before Lee showed up to save Audrey, was being hunted by the remaining members of the Polk family in the woods and is currently MIA. Meanwhile, back at the Roanoke house, Shelby had killed herself. Lee, thinking that Dominic was involved with Shelby's and Matt's deaths, locked him out in the hallway, allowing him to be slaughtered by the terrifying Piggy Man.

Surprisingly, Lee and Audrey survived through the morning, managing to make their way past the wreckage (and Dominic's body) downstairs to leave the house. Who would have thought that Audrey, of all the characters, would be a contender for Last (Wo)man Standing? But just before the two women could leave the house behind for good, they opened the door to see the Piggy Man – except it wasn't the Piggy Man fans were expecting at all.

Poised to kill the apparent monster, Lee and Audrey were stopped by the shirtless "Piggy Man," who quickly removed the pig head and looked plenty terrified himself. Audrey immediately recognized the stranger, calling him "Dylan." Dylan was played by Wes Bentley, the same actor who portrayed the Butcher's son, Ambrose White, during the "My Roanoke Nightmare" reenactments, which would explain why Audrey (and not Lee) recognized him.

It's unclear why exactly he was wearing the Pig Man head in the first place and what he has been up to this whole time while the rest of the cast has been getting murdered. But I'm sure all will be revealed in due time. Maybe Bentley's character played a double role in the reenactments, serving as both Ambrose and the Piggy Man.

Regardless, Twitter's AHS fans had some serious reactions to the unexpected last-minute appearance – which mainly involved confusion, surprise, and a lot of "WTF is going on."

As I mentioned, Dylan's sudden entrance begs so many questions. What is he doing at the house? How did he miss out on all of the slaughter and chaos? Why on earth is he wearing a Piggy Man costume? And perhaps most importantly, can the remaining survivors consider him a friend or a foe? In all likelihood, Dylan was hired by Sidney to dress up as the Piggy Man to terrorize the houseguests – except joke's on poor dead Sid, because the real Piggy Man showed up to take care of all that terrorizing himself.