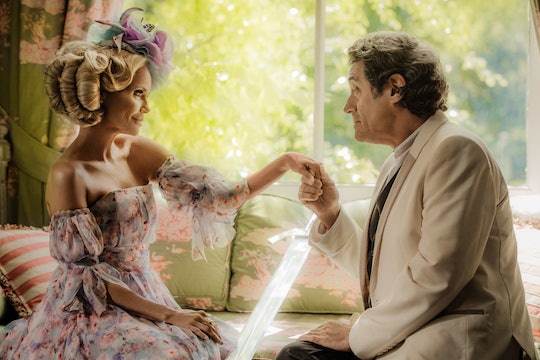 It's Finally Time To Meet Easter On 'American Gods'

Starz's much-anticipated release of American Gods, a series based on Neil Gaiman's epic novel of the same name, was so warmly received that the show has already been picked up for a second season, before Season 1 even aired in its entirety. The story is a modern saga of a battle between the Old Gods from various strains of mythology and the New Gods of contemporary America, like Media, Technology, and "The Intangibles" who represent the corrupt forces of capitalism driving the stock market. In Episode 8 (the season finale), viewers will meet a new character, but who is Easter on American Gods? Kristin Chenoweth tackles the role.

Easter is one of the Old Gods whom Shadow and Wednesday first encounter in the novel while on the run from the Men in Black. The first part of the book focuses on Wednesday, who enlists Shadow's help to lead the charge on consolidating the Olds Gods' power. In the world of American Gods, the deities are only as powerful as the belief people have in them. Most of the Old Gods were brought over long ago as people immigrated to America. But now that American society has modernized, belief in the Old Gods has waned in favor of the New, thus diminishing their power. (Warning: major book spoilers ahead!)

Wednesday and Shadow travel the country in search of the Old Gods, trying to talk them into banding together in a battle against the New Gods. Easter is based on the Germanic goddess of dawn and the spring (hence Kristin Chenoweth decked out in pastels and a fly Easter bonnet). In the book, the New Gods agree to meet with Wednesday, the leader of the Old Gods, only to murder him at the meeting. This act finally motivates the Old Gods to retaliate, but Shadow dies in the process. He goes on a whole side-epic-journey through the land of the dead, where he (and we) learn more about his origin story and the ways in which he's been deceived by Wednesday, who is actually his father.

Easter plays a pivotal role in this portion of the book, eventually being the god responsible for bringing Shadow back to life. Based on how the series is lining up with the book, it seems like this storyline is far in the future, setting Chenoweth up for a run on future seasons. You can catch the season finale of American Gods on Sunday, June 18 at 9 p.m. ET on Starz.