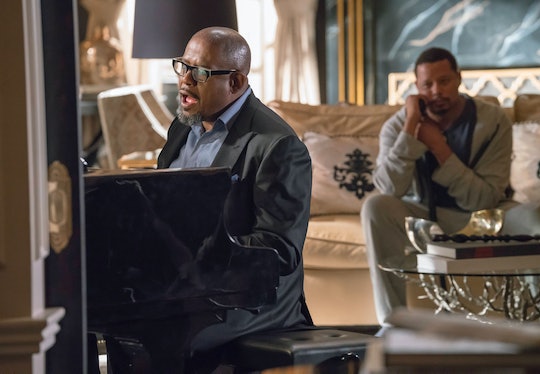 Eddie Is An Important Figure From Lucious' Past On 'Empire'

Empire producers confirmed that for Season 4, they're scaling back on the guest stars to focus on the Lyons. Fans on Twitter love seeing what's up with Lucious and his family, so that's what they want to bring the fans. That doesn't mean, though, that this season is completely void of A-list guest stars — quite the contrary, actually. Empire still boasts an impressive roster of actors, including Forest Whitaker. He plays Uncle Eddie, one of Lucious' mentors when he was just starting out. So who is Eddie on Empire? Whitaker plays a mysterious person from Lucious' past.

Lucious doesn't remember Eddie, but on Wednesday night's episode, "Full Circle," he seeks him out. When he and Claudia eat at one of his old haunts, the cook comes over and says that Lucious and Eddie used to dine there all the time. Lucious escapes Claudia's sight and asks the cook where he could find Eddie; that day happened to be his niece's wedding. Lucious decides to crash the event and catch up. He lies and tries to keep up with Eddie's references, but he just can't remember Eddie's stories. There's one exception: Eddie describes a time where Lucious assaulted a music programming director. As he tells the story, Lucious experiences flashbacks of the incident.

Eddie goes to Lucious' house where he plays a song for him and Cookie (and yes, that is actually Forest Whitaker singing!). Once Lucious exits, Eddie tells Cookie he knows what's up: Lucious has no recollection of who he is. Cookie tries to lie about it at first, then admits it's the truth. She also says that Empire Records may have to start liquidating its assets. Eddie then basically says Empire needs to get its sh*t together and have its artists make music, and Cookie agrees.

That was all viewers saw of Eddie this episode, but he has a multi-episode arc. When Lucious first showed up to the wedding, Eddie had no idea what state he was in. He realized how dire his amnesia is, though — and how dire Empire's financial situation has become. If I had to guess, I think Uncle Eddie will stick around to try to help with both of these problems. Since he's known Lucious half his life, he may feel like he can coach Lucious back to remembering all they've been through together. Furthermore, since he's such a music mogul, he could help bring Empire back afloat.

but since this is Empire, aka a hip-hop soap opera, I do wonder if Eddie is as selfless as he seems. As of "Full Circle," though, there's no indication that he has an ulterior motive. This may be the first time I actually believe an Empire character isn't cutthroat, and I think it's because Eddie is akin to both a wise sage and a father figure to Lucious. I could be wrong, as almost everyone on the show is out for their own interests, but I hope Eddie is as pure as he appeared to be in this episode.

What's even more special about this role is that it's art imitating life: Whitaker was a mentor to Terrence Howard, who plays Lucious. Whitaker suggested Howard for his role in Crash after Whitaker dropped out to direct another project. "So for Forest to play a mentor for Lucious [is extra special]," Howard told Variety. "We haven’t seen a lot of Lucious’ past collaborators." I'm excited to see how Eddie's role plays out, and hope that he can jar some of Lucious' memories (and happier ones than an assault). It's unknown how many episodes Whitaker will appear in, so I'm going to enjoy his performance every time he's on screen.