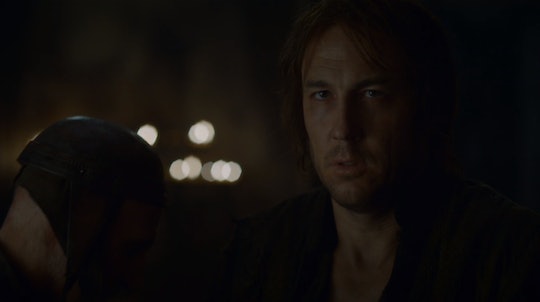 Who Is Edmure On ‘Game Of Thrones'? A Familiar Face Returns

The Season 6 Game of Thrones episode "Blood of My Blood" saw the return of a character we haven't seen since The Red Wedding. Lord Edmure Tully is back, having been dragged up from the dungeons of Walder Frey, where he's been held hostage. So who is Edmure on Game of Thrones? He's about to become a valuable pawn to Walder Frey.

Edmure Tully is Catelyn (Tully) Stark's brother, and the heir to House Tully of Riverrun. Unfortunately, Walder Frey, who held The Twins in the Riverlands as a vassal house of House Tully, has taken Riverrun thanks to the Iron Throne. During Season 3, he sends emissaries to plot a reconciliation with Catelyn and Robb Stark, which involves Robb marrying one of Walder Frey's daughters.

Robb, of course, has found his ladylove, and doesn't want to be bound to a homely-looking wife, so he and his mother wind up pressuring Edmund to take Robb's place as the husband/prize for one of the Frey daughters. Without the arrangement, the alliance is dead and Riverrun is under Lannister rule.

Eventually, Edmure agrees and his marriage to Roslin Frey is better known to Game of Thrones fans as The Red Wedding. To his surprise (and the audience's unease), Walder winds up revealing his sole attractive daughter at the altar to be Edmure's bride, and Edmure is relieved. But later during the celebration, after he is dragged off for "the bedding ceremony," Catelyn, Robb, Talisa, and her unborn child are all murdered by House Frey.

Edmure is taken as Walder Frey's hostage and prisoner and we basically haven't heard from him since. But Catelyn's uncle Ser Brynden Tully, also known as The Blackfish, retakes Riverrun in "Blood of My Blood," and Walder parades Edmure out of the dungeon for his armies to use in getting the castle back. Since Edmure is The Blackfish's nephew, and since he has been held hostage for years, presumably, Frey is planning on offering his release in exchange for getting the castle back. Jaime Lannister is also en route from King's Landing, shipped off by shiny new religious zealot Tommen, to assist Walder Frey in re-securing Riverrun, since it's technically a castle of the Iron Throne.

Regardless of who secures Riverrun, it seems like a major Tully reunion is on the horizon.